Gasquet through in Paris, Edmund withdraws 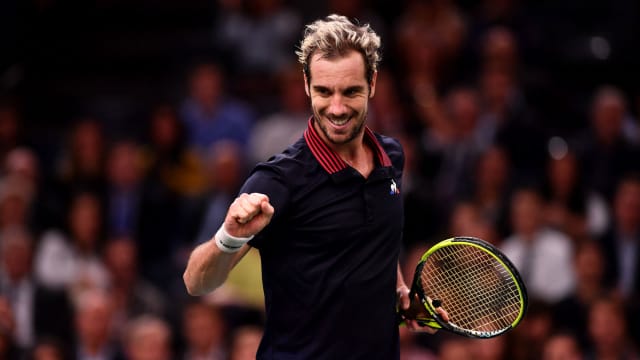 Richard Gasquet was one of two French players to triumph at the Paris Masters on Monday, as Australian Open semi-finalist Kyle Edmund withdrew.

There were also wins for Damir Dzumhur, Nikoloz Basilashvili and Karen Khachanov in the round of 64.

It has been 10 years since a French player won the Paris Masters, when Jo-Wilfried Tsonga was victorious, but Gasquet made a fine start on Monday.

The former world number seven overcame a tricky hurdle as Shapovalov was beaten in straight sets, the 19-year-old going down 6-4 7-6 (7-3).

Not every French star progressed, however. While Humbert came up short against Mannarino, the late match of the day saw the United States' Frances Tiafoe defeat Nicolas Mahut.

BASILASHVILI SET FOR ANOTHER BIG CLASH

Basilashvili has rubbed shoulders with some of the best in the world in recent weeks, beating Juan Martin del Potro to win the China Open, before losing to Alexander Zverev and then Kevin Anderson.

John Millman's retirement on Monday, with Basilashvili a set up, means the Georgian will face Anderson once again in the next round.

Nadal, Djokovic, Dimitrov, Tsonga, Pouille, Thiem, Sock... The "all star" mode is on at #RolexParisMasters ! And Roger Federer is coming tomorrow pic.twitter.com/3FjNfytk0J

EDMUND OUT AS DJOKOVIC READIES BID

Edmund has enjoyed a breakout year, winning the European Open and reaching the last four of a grand slam, but his season was ended early by a withdrawal with a knee injury.

That announcement led to a rejig of Tuesday's schedule, where some exciting matches are in store. Novak Djokovic faces Sousa, looking to continue an outstanding winning run and climb to number one this week.

There are several more French players in action, with 2008 winner Tsonga among them, in Paris as a wildcard.