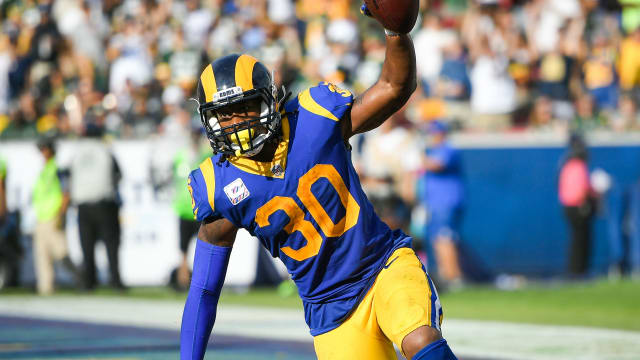 The Rams' perfect season was in danger when Aaron Rodgers and the Green Bay Packers visited Los Angeles, but they survived to improve to 8-0 on Sunday.

Green Bay got out to a narrow 10-8 lead at half-time before Los Angeles put together three consecutive scoring drives to take a six-point lead, 26-20, at the start of the fourth quarter.

But, it would not be a Packers game without a Rodgers fourth-quarter comeback. The veteran play caller strung together a five-play, 75-yard touchdown drive to swing the scoreboard back in Green Bay's favour.

The shootout continued as the Rams struck back with a field goal seconds before the two-minute warning.

However, a special play from Los Angeles' special teams halted Green Bay's chances at putting up another score and the Rams remained undefeated with a 29-27 victory.

The @RamsNFL recover the fumble on the kickoff! #GBvsLAR#LARams

Rodgers finished 18-of-30 passing for 286 yards and one touchdown. He was sacked three times for a loss of 33 yards.

Quarterback Jared Goff led the Rams to the win after completing 19 of his 35 passes for 295 yards and three touchdowns. Goff also had help from star Todd Gurley II. The Rams running back had 114 rushing yards on 25 carries, and 81 yards with a touchdown on six receptions.

Eagles offensive tackle Lane Johnson suffered a sprained MCL in the first quarter of Sunday's 24-18 victory over the Jaguars in London. Team-mate and cornerback Jalen Mills was later carted off with a foot injury in the third quarter.

Broncos linebacker Brandon Marshall suffered a knee injury in the second half against the Chiefs and did not return.

Bengals linebacker Carl Lawson tore his ACL in the first quarter against the Buccaneers. He will miss the remainder of the season.

Chiefs wide receiver Tyreek Hill suffered a groin strain against the Buccaneers. He had three catches for 70 yards before leaving Sunday's game.

Bears right guard Kyle Long suffered a right foot injury during his team's 24-10 victory over the Jets. Long exited the game in the fourth quarter and was spotted on crutches post-game.

Another week, another impressive performance from Chiefs quarterback Patrick Mahomes. He is only one of three play callers with 25-plus scoring passes through the first eight weeks of the season.

Colts kicker Adam Vinatieri now has the most points of any player in NFL history.

The Greatest of All Time.

Le'Veon who? Steelers running back James Conner is the first rusher in Pittsburgh history to have three consecutive games with two or more touchdowns on the ground.

Cleveland coach Hue Jackson did not mince words after the Browns' 33-18 loss to the Steelers. He addressed talk of potential changes to his staff, including the job status of offensive coordinator Todd Haley: “I never said I wanted to take over play calling. I said I wanted to help, that's it."

FitzMagic was back after Buccaneers coach Dirk Koetter benched starting quarterback Jameis Winston in favour of Ryan Fitzpatrick. Koetter discussed the decision after the game: "It's pretty simple, turning it over – over throws. It was a very windy day, it wasn't the easiest day to throw it but two of the four, the ball was just over thrown. Again, we can't turn it over seven times in two weeks – that's not hard to see, that's pretty obvious."