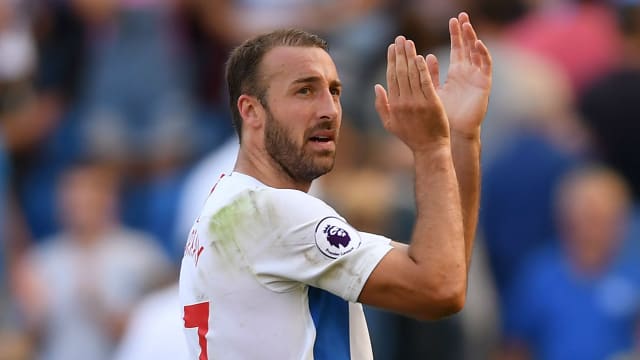 One week after being forced off against Newcastle United with a worrying head injury, Murray swept home three minutes into the second half.

Mat Ryan made a key save from Ryan Bennett in second-half stoppage time as Brighton held on to record three successive wins in the top flight for the first time in 37 years.

Murray, who had a spell with Brighton from 2008 to 2011 before returning, initially on loan, in 2016, came in for effusive praise from Hughton after his landmark strike.

"He's somebody that is enjoying his football at the moment, he's scoring goals at the highest level," he told Sky Sports.

"All of that is credit to him because of how he conducts himself, how he looks after himself, how he trains. You can't reach his age and play at this level without making those types of sacrifices."

Hitting the century in textbook fashion!

Reply with a GIF to sum up your feelings on this man!#BHAFCpic.twitter.com/nsxCadV6U5

Having conceded in each of their first seven games, Brighton have kept a trio of clean sheets in their three narrow successes.

Hughton admitted there is room for improvement but was pleased with his side's defensive solidity.

"We'd prefer to not make a habit of having to defend well," he said.

"We were up against a very good Wolves team. It's certainly a trait that brings the best out of a team. But I think we can play better."

Brighton's goal came from an initial throw-in on the left and Wolves coach Nuno Espirito Santo lamented the manner of their opponents' winner.

"Small details change realities," he said. "The reality of this game was changed by the detail of a throw-in that we conceded a goal [from].

"The reality was that we did enough to deserve [more]. But credit to Brighton because they defended with their bodies on the line."

The defeat was Wolves' second in a row, yet Nuno, who had made his first change to the starting XI all season by introducing Adama Traore, felt the performance was an improvement on the display in the 2-0 home loss to Watford.

"The result is definitely not what we expected," he added. "The boys worked for it, the performance was good; it was better, a good reaction in that aspect.

"But we must improve on the final touch, we created many chances, we deserved to put the ball on the inside of the net, but today was not the day."