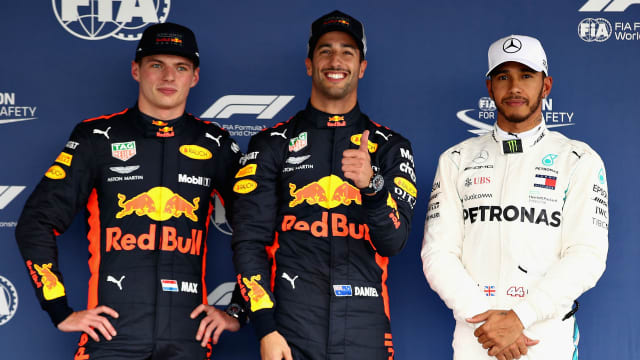 Lewis Hamilton cut a cheery figure after qualifying third for the Mexican Grand Prix, a race in which he need only finish seventh to clinch the Formula One title.

The Mercedes man could not match the pace set by the Red Bulls and came in behind Max Verstappen and pole-sitter Daniel Ricciardo on Saturday.

But Hamilton does not need to add to a run of six wins in eight races and might instead enjoy surveying the scene from the second row of the grid, avoiding a tussle where Verstappen will look to respond to missing out on a first career pole.

Verstappen triumphed in Mexico last year, but team-mate Ricciardo won in Monaco when he last started from the front earlier in 2018.

Vettel – who will begin from fourth – has never won this race and only that result, combined with a lowly Hamilton finish, would deny the Briton a fifth championship, drawing him level with the great Juan Manuel Fangio.

Starting each day with a smile. Hoping you’re having a great weekend #positivevibes#mexicoGP#f1@MercedesAMGF1pic.twitter.com/iumcMSed0Y

Even after a Red Bull front-row lockout, team principal Christian Horner appeared to be aware of the risk of allowing Verstappen and Ricciardo to attack one another on Sunday.

"They both really want it. That's the danger," Horner told Sky Sports. "But they're both part of a team, which we'll talk about. They're free to race, but they've got to keep it clean. The race won't be won on the first corner."

Much has been made of the potential for a hard race in the early stages, but Horner will not want to see the two Red Bull stars take one another out like they did in Azerbaijan.

The flying Bulls Daniel and Max secure the Team's first front row lock out since the 2013 USGP #MexicoGP#F1pic.twitter.com/NfG1t4dwwE

The rivalry within the Red Bull ranks has not escaped Vettel's attention either.

The Ferrari man must win to have any hope of extending the title race to Brazil, but he, like Hamilton, might prefer to see what damage Verstappen and Ricciardo can do to one another.

Vettel explained: "The Red Bulls are very fast and hard to beat, but maybe they will beat themselves."

The expected rain held off for qualifying, but some stormy conditions could be in store for the race.