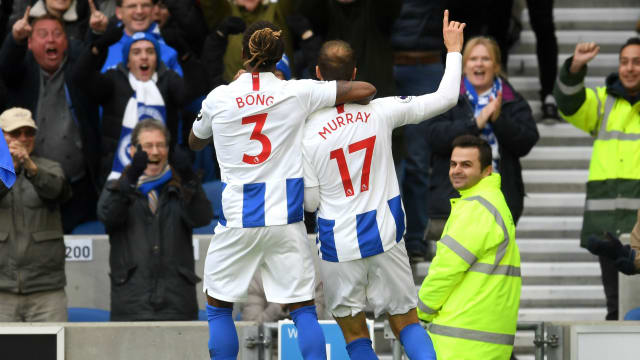 Glenn Murray's 100th goal for Brighton and Hove Albion delivered their third straight 1-0 success in the Premier League as they beat Wolves.

The striker, who came off last weekend against Newcastle United with a head injury, turned home from seven yards out early in the second period after Bruno had shot back across goal.

It proved to be the winner as Chris Hughton's side won three top-flight games in a row for the first time in 37 years.

Wolves, meanwhile, fell to their second straight defeat after being beaten by Watford last time out. They had been the only club in Europe's top five leagues yet to make a change to their starting XI, but Nuno Espirito Santo introduced Adama Traore for his first start.

It was on the other flank where they were finding joy, though, and Wolves felt aggrieved when they were not awarded a penalty when Matt Doherty's shot struck Jose Izquierdo's arm.

The Colombian was struggling to get to grips with Doherty and the Irishman lost him again as he entered the box via a one-two with Raul Jimenez only to fire wide.

Brighton squandered an even better opening before half-time when Shane Duffy rose to meet Solly March's back-post corner and somehow nodded against the outside of the post.

However, three minutes after the restart, Hughton's men led.

Murray, virtually anonymous in the first period, hooked the ball across the box following a throw-in and when Bruno's shot came back in, he was on hand to score the opener.

Nuno responded by making a double change – taking Traore and Jimenez off – and Joao Moutinho forced Mat Ryan into a save with an effort from range.

Doherty saw a weak effort from substitute Ivan Cavaleiro's cross deflected into the side netting while Ruben Neves' effort from a semi-cleared corner was kept out by Ryan. In stoppage-time the Australian made a brilliant one-handed save to deny Ryan Bennett and ensure Brighton held on for a third win on the spin.

What does it mean? Brighton's good form continues

Hughton's side are looking up after three successive victories as they moved level on points with Manchester United. Wolves' bright start means they are still in mid-table, but they will want to get out of this mini rut.

Magical Murray at it again

He might be 35 but Murray showed he is still invaluable to Brighton. In five home games this season he has scored five times. Wolves might have kept him quiet for most of the afternoon, but when it mattered, he was in the right place at the right time.

Nuno's response to the defeat to Watford was to hand ex-Barcelona youth player Traore a maiden start. So often dangerous coming on late in games with his pace and power, Traore was unable to take advantage of coming up against 38-year-old Bruno, who the Spaniard failed to detect in the build up to Brighton's goal too.

38y 26d - At the age of 38 years and 26 days, Brighton defender Bruno is the oldest player to assist a Premier League goal since Jussi Jaaskelainen (38y 257d) on New Year's Day 2014 for West Ham against Fulham. Veteran. pic.twitter.com/N65iDsexlE

It's a trip to Goodison Park to face Everton for the Seagulls next weekend. Wolves will welcome Mauricio Pochettino's Tottenham to Molineux.