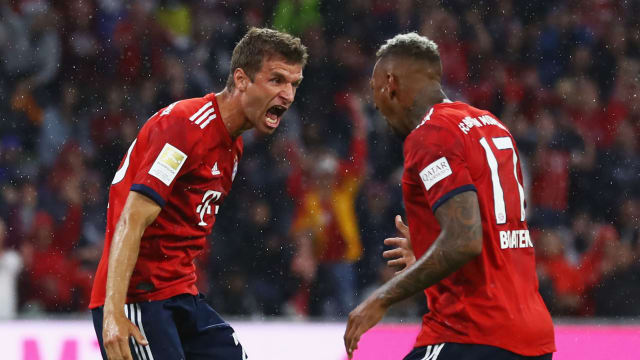 Thomas Muller and Jerome Boateng have been challenged to win back their places in the Bayern Munich starting line-up by head coach Niko Kovac.

Kovac's job was the subject of mounting speculation as Bayern entered the October international break on the back of four winless games across all competitions.

They followed up a restorative 3-1 Bundesliga win over Wolfsburg with a routine 2-0 Champions League triumph in midweek at AEK Athens – Kovac's selectorial tweaks paying an instant dividend.

But the alterations left experienced Germany duo Boateng and Muller on the bench, with the former an unused substitute on both occasions and the latter only enjoying a 15-minute cameo in the Greek capital.

Kovac spoke of the need to manage his players' workloads ahead of their third away game in eight days at Mainz, but countered this by warning hard work rather than reputations represented the route back to the first XI.

"After the international break we decided on a line-up that played the last two games. We did a good job and won both games," he said, having preferred Arjen Robben and Serge Gnabry in the wide attacking roles ahead of Muller – whose situation could be further complicated by Franck Ribery's return to training.

"We are happy, even those that didn't play. That's just what's happening at the moment. That doesn't mean Thomas won't play the next games.

Squad news: "@ArjenRobben is suspended. @FranckRibery will be back in the squad tomorrow and I don't see any issues with @jamesdrodriguez." #M05FCB#packmas#MiaSanMiapic.twitter.com/wIYBSfifnO

"We have to make decisions going into every game. He's still nice and friendly and training well. It's all good."

"In our first games [this season] I did switch around in central defence. Now, in the last two games I just chose the same line-up and they did a very good job.

"Jerome is training very well. I can't announce now that I'm going to change everything tomorrow.

Niklas Sule has been Mats Hummels' central defensive partner for Bayern's return to winning ways and Kovac added: "I think it is maybe not a bad the situation the players are in. The players who are benched now know they have to perform to get back in the team.

"No one can say I will rotate the line-up so they will play automatically. I think that's good for the performance of the squad if you know you have to perform hard in training and games.

"Thomas worked hard, all of them have. The players who were benched, I think they are contemplative and considering what is going on."

Kovac's chosen midfield shape has featured Javi Martinez playing a holding role in a 4-3-3 behind dual playmakers Thiago Alcantara and James Rodriguez – the Colombia international, who has shaken off a bout of illness that hindered him against AEK.

#Kovac on @Thiago6: "He is a great player. He works incredibly hard and has great qualities. I'm happy that he is with us." #FCBayern#MiaSanMia#M05FCBpic.twitter.com/6RxZ46JXjX

Martinez was the unlikely opening goalscorer in midweek and, in praising his performances, Kovac conceded the trio all being Spanish speakers had influenced his selection.

"Javi can initiate attacks but his job now is to pass the ball quickly to our number eight players," he said.

"The language does play a role because they all speak Spanish. James doesn't speak great German like Javi and Thiago."