Home comforts for Thiem and Federer 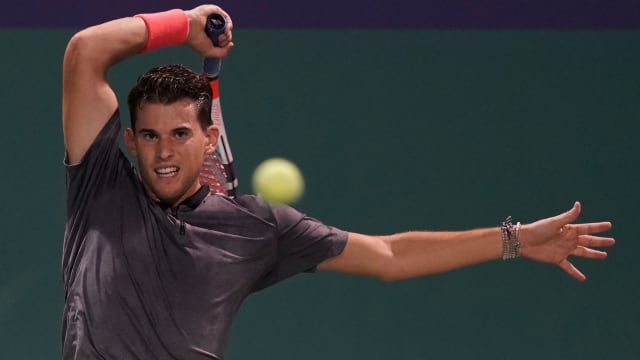 Dominic Thiem beat Sam Querrey to reach the quarter-finals of the Vienna Open as fellow ATP Finals contender John Isner was knocked out, while Roger Federer moved into the last eight of the Swiss Indoors Basel.

Thiem moved a step closer to becoming the third Austrian to win the title in his homeland with a 6-4 6-4 victory over Querrey on Thursday.

The top seed's 50th win of the season, secured with a solitary break in each set, also kept him on course to qualify for the season-ending event in London next month.

Kei Nishikori will attempt to throw a spanner in the works and claim precious points in his bid to sneak an ATP Finals spot by beating Thiem - eighth in the Race to London - on Friday after defeating Karen Khachanov 6-2 6-2.

Nishikori must reach the semi-finals to add to his points tally as he looks to move above Isner, who was beaten 6-4 6-4 by Gael Monfils in the second round.

Kyle Edmund was brought back down to earth by Fernando Verdasco after winning his maiden title in Antwerp last weekend, losing 6-4 3-6 6-3 to the unseeded Spaniard, while Mikhail Kukushkin dumped out Andrey Rublev.

Federer is three wins away from a ninth title in his hometown tournament after recovering from a shaky start to beat Jan-Lennard Struff 6-3 7-5.

The 20-time grand slam champion trailed 3-1 in the first set, but won the next five games to take the opener and broke once in the second to ensure he will face Gilles Simon, who got past Ernests Gulbis in straight sets.