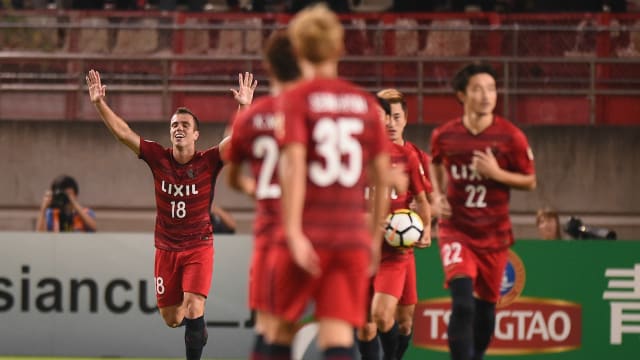 Kashima went into the game hoping for a repeat of their group-stage win in Suwon after coming from two goals down to win the first leg 3-2.

The 2017 J1 League runners-up looked to have one foot in the final when Shuto Yamamoto put them ahead on the night after 25 minutes, but Suwon staged a dramatic second-half fightback.

Three goals in eight minutes from Im Sang-hyeob, Jo Sung-jin and Dejan Damjanovic gave Suwon the advantage before Serginho teed up Daigo Nishi to level the tie after 64 minutes.

With extra-time beckoning, the Antlers poured forwards and got the reward their bravery deserved when Serginho smashed home the winner from inside the penalty area eight minutes from time.

@atlrs_official 's Serginho with yet another #ACL2018 goal and he is our Tsingtao Player of the Match once again! #SSBvKSM pic.twitter.com/BCq0tX5FBa

A bright start by Bluewings fell flat when Yamamoto rose to head in Serginho's free-kick and the home side looked deflated at the interval despite a dominant first-half performance.

Coach Seo Jung-won sent out a revitalised side for the second half and Im poked the ball over the line from close range to level the match seven minutes after the restart.

The goal sparked an onslaught from Suwon, who took the lead on the night when Jo applied a glancing header onto Yeom Ki-hun's cross and they turned the tie on its head when Damjanovic burst down the right flank and drilled a low shot into the far corner.

But there was to be one final twist in the tale when Serginho received the ball in the middle of a crowded penalty area, took a touch and then lashed it high into the net to clinch the victory and set up a two-legged final tie with Persepolis, which begins next month.