Language no barrier to Dortmund dangermen Reus and Alcacer 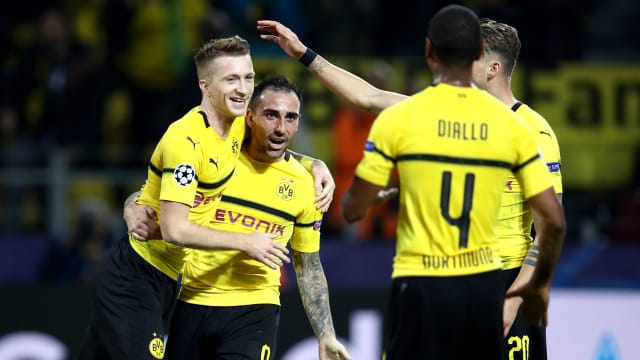 Marco Reus believes he has struck up an immediate understanding with Paco Alcacer at Borussia Dortmund, despite something of a language barrier.

Spain international Alcacer has been one of the standout performers in the Bundesliga since joining on loan from Barcelona, scoring seven times in just four appearances to propel Dortmund to the top of the table.

Reus, with five goals and three assists in eight outings, has also been showing signs of returning to his best form after an injury-hit last two seasons.

And the 29-year-old thinks his link-up with Alcacer has been hugely encouraging, especially since football is their main common language.

"I have to say, my Spanish is not very good, but his German is also not good," Reus said ahead of his side's Champions League clash with Atletico Madrid. "We try to talk a little in English, but you can see that we immediately hit it off on the pitch.

"Right from the start, you could see he understands football and knows what he's doing as a striker, where he must run.

"He had little difficulty adjusting. If he continues scoring like that, then he helps us a lot."

Dortmund, unbeaten in all competitions this term under Lucien Favre, are level with Atletico on six points heading into Wednesday's Group A match at Signal Iduna Park.

Reus believes patience will be the watchword against Diego Simeone's disciplined outfit.

"I think first of all it will be important to be patient," he said. "Atletico are a team that can defend very well in the 4-4-2 system and they close off space. I think that we will get few chances to score, so it's important to use the scoring opportunities we get.

"We have had a lot of offensive quality in the last few weeks and needed few chances to score. We need that urgently [on Wednesday] because Atletico defensively stands are very solid. I think patience is the right word."