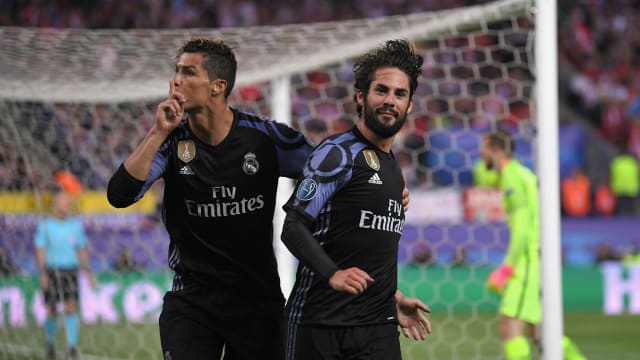 Isco has dismissed renewed talk of Cristiano Ronaldo's importance to Real Madrid as they look to break out of their current poor form.

Ronaldo departed for Juventus in July and left a gaping hole that Madrid have struggled to fill with a five-match winless run in all competitions heaping pressure on coach Julen Lopetegui.

Saturday's 2-1 home defeat to Levante prompted talk Lopetegui could be dismissed prior to Tuesday's Champions League clash with Viktoria Plzen but the former Spain coach carried out his media duties as normal on Monday and must hope a resounding midweek win will give him the chance to lead the side in Sunday's first Clasico of the season against Barcelona.

Isco offered his backing to Lopetegui and swatted aside questions about how the team were seemingly failing to cope following Ronaldo's exit.

@isco_alarcon: "I have confidence in this team. We’re winners and we've shown it. We need support and love of the fans. Hopefully tomorrow's game is a turning point. Let's play well, make the fans happy and we can change the run of the negative results we’re going through." pic.twitter.com/EGeaaJmphO

The Spain international said: "We've been talking about this all season.

"There's no point in talking about someone who isn't here.

"I miss [Gareth] Bale and [Dani] Carvajal when they're not available. We have the solutions in the squad to score goals.

"We can't cry about someone who didn't want to be here."

Ronaldo has scored five goals in 10 games for Juventus this season.