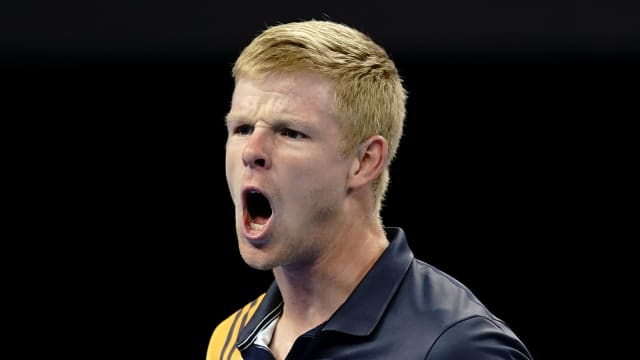 Kyle Edmund was reduced to tears after coming from a set down to win the first ATP Tour singles title of his career with a defeat of Gael Monfils in a gripping European Open final.

The mercurial Monfils served 17 aces and was broken just the once, but Edmund twice thrived on the pressure of a tie-break to break his duck.

Australian Open semi-finalist Edmund's emotion came out when he consigned the Frenchman to defeat in a tight tussle that took two hours and 25 minutes to settle, having beaten Monfils' compatriot Richard Gasquet at the semi-final stage.

That's it! @kyle8edmund is the winner of the 2018 European Open! He beats @Gael_Monfils in an unforgettable final in 3 high level sets: 3-6, 7-6, 7-6! Well done, Kyle! #EuropeanOpen2018#ATP#Tennis#Antwerppic.twitter.com/8nQDlItK7h

Edmund had not lost a set this week, but Monfils changed that after getting off to a dream start, winning the first three games of the match.

Monfils did not face a single break point in the opening set, his power and precision not giving the Englishman a look-in, but Edmund turned the tide by racing into a 4-1 lead in the second.

Back came Monfils to force a breaker, only for Edmund to secure two mini-breaks and take it to a deciding set.

Neither player could convert either of the two break points they had in the final set and another tie-break always looked to be on the cards.

Edmund executed a sublime backhand stop volley to perfection in a breaker that featured yet more thrilling baselines rallies as Monfils was denied an eighth title.