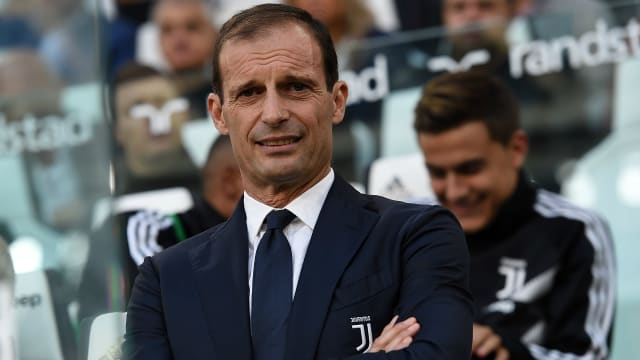 Massimiliano Allegri accused his players of being distracted by their looming Champions League clash with Manchester United as they lost their 100 per cent start in Serie A against Genoa on Saturday.

Daniel Bessa's second-half header cancelled out Cristiano Ronaldo's opener as Juve dropped points for the first time in the league this season.

Ronaldo's 400th career goal in Europe's top divisions had put the champions in control, but complacency crept into their display some time before Bessa capitalised on a defensive error to snatch a 1-1 draw.

Allegri felt his side paid the price for thinking ahead to their clash with United at Old Trafford on Tuesday and was frustrated by the inconsistency of their display.

"We left the game after a good start," he told Sky Sport Italia. "We conceded a goal from a loss of focus. These are situations that shouldn't happen. They're games in which the Scudetto can be won and lost.

FT: A challenging night but the Bianconeri remain unbeaten #JuveGenoa#FinoAllaFine#ForzaJuvepic.twitter.com/jivfJXYRsA

"We played, from a certain point of view, with our heads in Manchester. We had to win. We went from frantic to sleeping and vice versa."

Bessa headed in Christian Kouame's cross from near the corner flag 67 minutes in after Juve's defenders had come to a standstill, apparently expecting the initial loose ball to bounce out of play.

Allegri hopes the lack of concentration will serve as a warning going forward.

"A good 10 minutes before the goal, we were already drifting out of the game," he said. "It was coming; we could see it from the touchline. I think it'll be good for us. Everyone will now remember that nothing can be taken for granted.

"The ball was bouncing around for three or four seconds, so we had all the time needed to go and mark the players in the box, but we had already been drifting out of the game for a while earlier."

Juve are seven points clear of Napoli at the top of the table after nine matches, but that gap will be closed to four if Carlo Ancelotti's side win at Udinese.