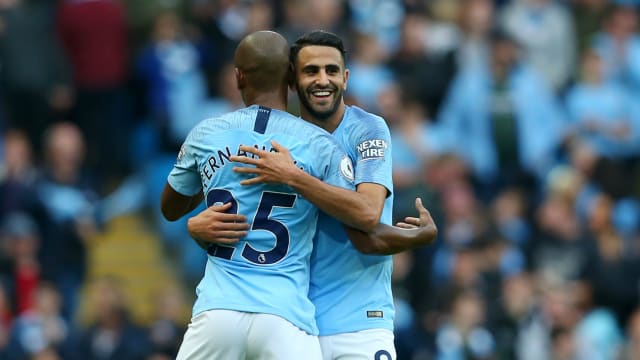 Pep Guardiola hailed an "extraordinary" Fernandinho performance after the midfielder scored a stunning strike in a 5-0 defeat of Burnley that sent Manchester City back to the top of the Premier League.

City were already on track for victory at the Etihad Stadium on Saturday thanks to goals from Sergio Aguero and Bernardo Silva before Fernandinho's rocket secured all three points for the champions.

Riyad Mahrez and Leroy Sane added further goals in the closing stages, with an ideal day for City completed by Kevin De Bruyne's return to action after two months on the sidelines.

But it was Fernandinho and John Stones - the England defender filling in on the right side of defence - who caught Guardiola's eye.

"All the players make a good performance, especially John, playing in a position that is not natural for him in the absence of Kyle [Walker] and Danilo," Guardiola told a news conference.

"He did really well, Fernandinho made an extraordinary performance and in general, especially in the second half, it was a good performance.

"Fernandinho was so important for us, no doubt. Today he was clever in finding more time to find the strikers, wingers and attacking midfielders. His body shape, every time he received the ball he was ready to play.

"So he was incredible, today was one of the best performances of the season and we're delighted, he is a key player for us."

Mahrez bounced back from missing a penalty at the end of a 0-0 draw at Liverpool before the international break with a fine display that was capped with the goal of the day, a 25-yard curler.

"He played so good at Anfield, that's why I decided to play him again," Guardiola told reporters of the former Leicester City star. "It was not easy there, he plays with a lot of personality, football can happen, but only takers can miss penalties.

"But we knew it - he [Mahrez] is a talented player and a guy who likes to play with the ball and he doesn't miss balls. In the box, he is a dangerous guy because he can go to the byline or score with his left or his right, he is a good signing for us."

34 - @ManCity are unbeaten in their last 34 Premier League games kicking off at 3pm on a Saturday - the longest ever such run in the competition. Traditionalists. #MCIBUR

City face Shahktar Donetsk in the Champions League on Tuesday and Guardiola indicated the returning De Bruyne is ready to play a part.

"He has no pain, physically he is a guy who is so strong, he needs minutes, this is the first time he played 30 minutes and this is so important," the Catalan continued.

"We have a lot of games but of course he's not new - not like Riyad - three years together so when I say something he knows what we have to do. He's another important player and he's back and will help us to achieve what we want to do. The first target is to play good."