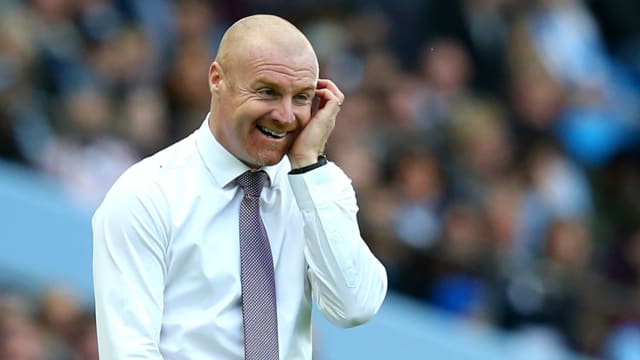 A hugely frustrated Sean Dyche felt two Manchester City players should have been sent off and accused the Premier League champions of cheating as his Burnley team were battered 5-0 at the Etihad Stadium.

Yet City's second goal, scored in the 54th minute, was controversially given as the ball appeared to go out of play after Burnley's defence paused in anticipation of a call from referee Jon Moss following a challenge on Sane.

Dyche highlighted that incident as a key moment and was also unhappy with Moss' decision to only book Vincent Kompany for a high tackle on Aaron Lennon in the opening minute.

"It's just a throw of the leg and it's high, Az [Lennon] has got a cut with two stitches in it, high on his thigh.

Dyche accepted his team should have kept their concentration as City scored the decisive second but felt there were numerous reasons not to give the goal and also claimed Sane should have been dismissed for clashing with Matt Lowton.

"There's so many different things. Sane goes down with the tiniest of a touch, a pull of the shirt," he added. "I don't know how hard you need to pull a shirt for someone to spin around and fall on the floor; as you know, I'm always amazed by what's going on in the game at the moment.

"So then our players are responding to that feeling aggrieved that he's gone down far too easily, let's just say, we'll leave it at that. Then the referee is going to blow his whistle, then he decides not to blow his whistle and waves it away.

"I thought it then, I've seen it back. With the best view we can get of it the ball was out of play - forget about everything else. The biggest learning curve, I was saying to the players afterwards, you have to stay focused and then afterwards remonstrate.

"The problem was we were that locked in that moment we didn't let it go and then they scored from a really soft corner and the game's gone then. We're not getting back here at 3-0."

"That one is a definite, I don't think there's any debate in that because you can't just run around a football pitch and when the ball is miles away from you just absolutely smash someone round the legs. That's unacceptable, surely, in everyone's view. So I think that one's a given.

"I'm amazed by what's going on in the game but no one cares about it."