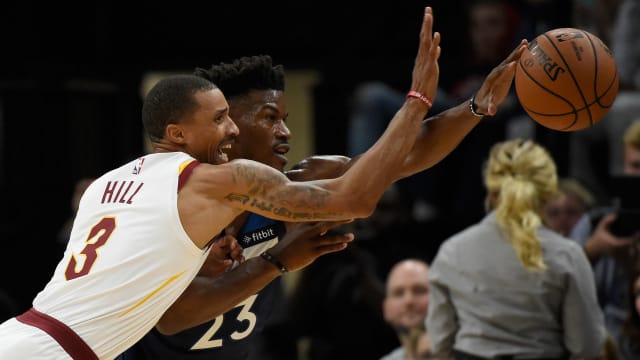 Minnesota Timberwolves guard Jimmy Butler knows how to turn a crowd around.

Butler not only silenced the boos he received during player introductions, but turned them into "MVP" chants in Minnesota's home opener.

The Timberwolves hosted the Cleveland Cavaliers and both teams were searching for their first win.

After a dominant second quarter, Minnesota bolstered their lead and cemented a 131-123 win behind Butler's game-high 33 points.

The visiting Cavs made things a little interesting after half-time by outscoring the Timberwolves 41-33 to get within nine points of the lead. Cleveland were within range late in the third quarter but a pair of free throws by Andrew Wiggins and a three-pointer from Butler to open the fourth widened the gap.

Cleveland continued to pressure Milwaukee and pulled within five points with less than two minutes left. A 26-foot three-pointer from Cedi Osman ended the Timberwolves' brief run, but it started right back up with a Jeff Teague jump shot.

Butler scored 15 of Milwaukee's 27 fourth-quarter points, including a long three at the start of the final frame. Wiggins finished with 22 total points.

For the Cavs, Kevin Love had a team-high 25 points and Osman netted 22.

The Boston Celtics and Toronto Raptors were neck and neck nearly the entire game in the Eastern Conference showdown, but it was none other than Kawhi Leonard who led the home team to a 113-101 win. Toronto trailed by four points at half-time, but thanks to Leonard's 15 third-quarter points the Raptors led by three heading into the final quarter. He finished with a double-double behind 31 points and 10 rebounds.

Giannis Antetokounmpo starred in the Milwaukee Bucks' 118-101 win over the Indiana Pacers. Antetokounmpo finished with 21 points and 15 rebounds, 12 of which were on the defensive end.

New Orleans put up a whopping 40 points in the first quarter, but nothing was as impressive as Nikola Mirotic's performance. The fifth-year NBA player is in his first full season with the Pelicans and they sure loved the edition against the Sacramento Kings. Mirotic had a career-high 36-point night after shooting 14 of 21 from the field and five of nine from behind the arc. New Orleans defeated Sacramento 149-129 for their second straight win.

Two of the Orlando Magic's starters were not in their best form against the Charlotte Hornets. Jonathan Isaac and DJ Augustin each had just two points in Orlando's home loss to Charlotte. Isaac, at forward, was one of three from the field. Augustin, a veteran guard, was not much better as he finished one of five. The pair combined for three missed three-point shots.

Anthony Davis was showing off early. The power forward slammed one down as New Orleans hosted Sacramento.

Miles Bridges added three to the Hornets' lead with a nice shot early in the fourth quarter. The 12th overall pick in the draft netted 15 points in 14 minutes. Bridges was six of eight from the field and a perfect three of three from long range in Charlotte's first win, a 120-88 victory over Orlando.

Miles Bridges connects from distance for the @hornets!#KiaTipOff18#Hornets30pic.twitter.com/vUypOzFNC6

LeBron James made his Lakers debut on Wednesday in Portland but Saturday promises yet another debut for the franchise's biggest star. James is set to make his Los Angeles home debut against Houston, and both teams are looking for their first win. In the Lakers' season opener, the young squad struggled from three-point range and finished just 23.3 per cent (seven of 30) from beyond the arc. Meanwhile, the visiting Rockets are trying to find a way to utilise sixth man Carmelo Anthony. For the first time in his 16-year career, Anthony is not in the starting lineup and is still getting used to the new role. He tallied nine points on three-of-10 shooting in 27 minutes in Houston's opening loss.