Red Sox move ahead of Astros in ALCS 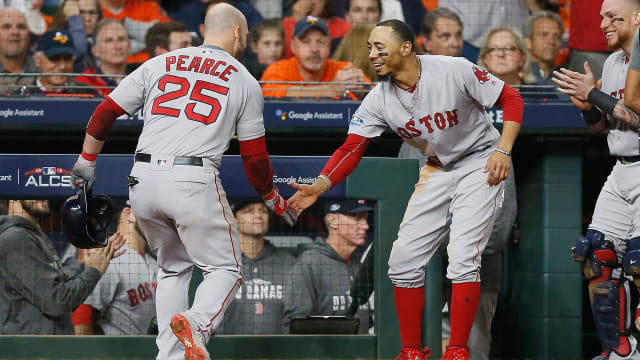 The Boston Red Sox claimed a 2-1 lead in the American League Championship Series after an 8-2 win over the Houston Astros.

Nathan Eovaldi tossed a gem on Tuesday, while Jackie Bradley Jr.'s eighth-inning grand slam iced the game for Boston in game three of the MLB's ALCS.

Keuchel put Astros in their most uncomfortable spot

Dallas Keuchel has done one thing all year long without fail: he has put the Astros in tough spots in the first inning. Keuchel allowed the Red Sox to get three hits and two runs before recording two outs.

The 2015 AL Cy Young winner posted a 6.88 ERA in the first frame this season and allowed a .331 batting average against. In 10 separate starts Keuchel allowed runs in the first inning and in all 10 of those starts the Astros trailed after the first frame.

It is less than ideal to allow runs in the first, of course, but for Houston it is even tougher. The Astros batted .248 this season when trailing in games and reached base at a .315 clip. That was fourth out of five playoff teams in the American League.

While the Astros can come back in games, it is not their strength and Keuchel put Houston in a spot they were less than comfortable with Tuesday.

Eovaldi was great as he allowed two runs on six hits in six innings of work. The trade-deadline acquisition has now made two starts for the Red Sox this postseason and has surrendered just three runs in 13 innings of work.

So is he the Red Sox's best starter right now? The argument can certainly be made as he has gone deeper into games than any of Boston's other starters and has allowed less runs than any of them, as well. He certainly has the best stuff and the hardest fastball. The stuff does not make him the best starter, but it makes him tougher to hit in the playoffs.

He probably is not the Red Sox's best starter, as that will always be Chris Sale despite his current health issues, but he may be the team's most reliable arm right now.

The Astros made a controversial decision in the AL Division Series by leaving pitchers Hector Rondon and Joe Smith off the 25-man roster. Houston instead opted to keep Myles Straw and Will Harris on it and they won the ALDS over the Cleveland Indians in a sweep.

Houston changed their mind in the ALCS and put Smith and Rondon on the roster instead of Straw and Harris. That decision has backfired so far. ​While he managed to throw a scoreless inning in mop-up duty on Tuesday, Rondon faced one batter in ALCS game two and gave up a hit and an RBI. Smith faced two batters Tuesday and gave up a go-ahead homer to Steve Pearce.

Roster decisions matter in the postseason and it appears the Astros may have made the wrong choices this time, especially with Framber Valdez being left off both rosters.