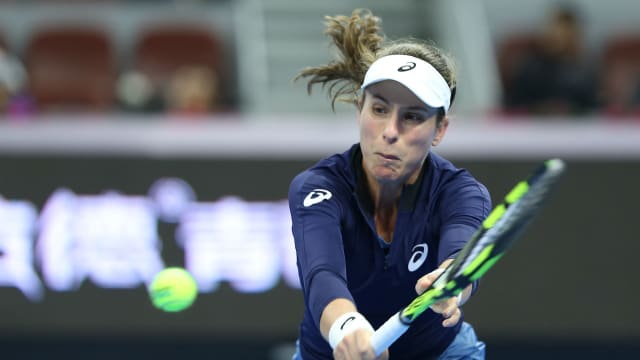 Johanna Konta avoided another first-round exit with a straight-sets Kremlin Cup defeat of Elise Mertens, while Julia Goerges and Garbine Muguruza moved into round two of the Luxembourg Open.

Konta fell at the first hurdle in Wuhan and at the China Open, but got that winning feel again after seeing off seventh seed Mertens 6-3 7-5 on Tuesday.

The British number one, who split with coach Michael Joyce last week, struck 28 winners and broke four times to secure a morale-boosting victory in Moscow at the end of what has been a poor season.

Konta will now face Daria Gavrilova after the Australian got past lucky loser Vitalia Diatchenko 7-6 (7-5) 7-5 in the final match of the day.

Kristina Mladenovic, a quarter-finalist in Linz last week, will come up against Anett Kontaveit in the last 16 after beating Anna Kalinskaya 6-1 6-3.

Top seed Goerges advanced in Luxembourg at the expense of Viktoria Kuzmova, winning 6-4 6-3.

Muguruza returned to form with a run to the semi-final of the Hong Kong Open last week and the two-time grand slam champion was impressive once again in a 6-4 6-4 success over Stefanie Voegele.

Katerina Siniakova, Kirsten Flipkens and Carla Suarez Navarro were the other seeds to go through, but 2016 champion Monica Niculescu was dumped out by Fiona Ferro.

Let's give a for @GarbiMuguruza and the Shot of the Day from @WTAluxembourgpic.twitter.com/RR3qWAsdNX