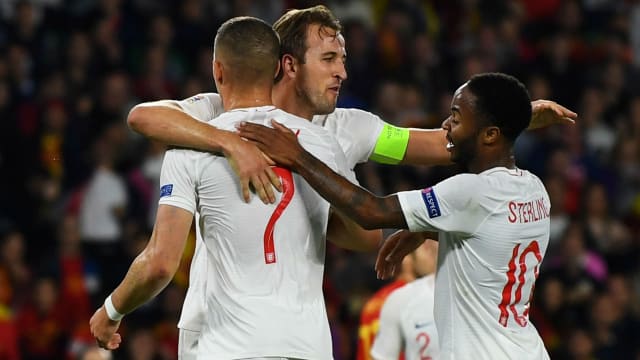 Raheem Sterling ended his international drought with a brace before England survived a second-half onslaught from Spain to record a stunning 3-2 Nations League victory in Seville.

A Marcus Rashford goal sandwiched between a pair of finishes from Sterling had Gareth Southgate's men 3-0 up at the break, though Harry Kane – the architect of two and involved in all three – was their leading light.

Things were more one-sided due to Spain's desperation after the interval and Paco Alcacer scored his 10th goal in six games for club and country just before the hour, but England held firm to claim their first victory in UEFA’s new competition.

Spain were quick to apply pressure, but England looked promising and scored a well-worked opener 16 minutes in – Sterling blasting into the top-right corner of David de Gea's net after Kane and Rashford had combined to put the Manchester City forward in the clear.

Rashford was then the man to apply the finishing touch 13 minutes later, as he slotted home after Kane's inch-perfect pass.

Things got even worse for Spain - who had won the reverse fixture 2-1 at Wembley - just before the break.

Ross Barkley's sumptuous ball over their backline found the run of Kane, who squared across goal for Sterling to apply an easy finish.

Spain unsurprisingly improved in the second half and Alcacer pulled one back shortly after his arrival in the 57th minute, losing his marker to head in from a corner.

Jordan Pickford was then lucky to escape unpunished, as he appeared to pull back Rodrigo Moreno in the area after being robbed of possession by the Valencia forward, who was denied a goal by the goalkeeper's last-ditch slide tackle.

Sergio Ramos did find the net when heading in Dani Ceballos' cross deep into added time, but it was too little, too late for the hosts as England successfully clinched a first away win against Spain since 1987.

3 - Spain have conceded three goals in a competitive home game for the first time ever. Confusion. pic.twitter.com/CnoWN9AvoL

What it means: Kane is so much more than a striker

Despite his goals in Russia, Kane's World Cup performances actually attracted criticism as he struggled to get involved in open play. In Seville, however, he showed just how effective he can be when dropping deep. He may not have scored, but his overall contribution was absolutely vital.

Rashford breathes a sigh of relief

Rashford's finishing was in the spotlight after a couple of crucial misses in England's 0-0 draw in Croatia last time out, but on Spanish soil he converted a key chance with ease, having already assisted his side's opener.

Ramos gets it wrong

Too often Kane was able to drop into deeper without being picked up by Spain, helping him play crucial roles in England's second and third goals. Ramos, as the defensive leader, should have ensured that was unable to happen. While he did score a late goal, it could not paper over a disappointing outing.

2 - Raheem Sterling has scored two goals in a game for the first time for @England, while this also is the first time Harry Kane has provided two assists in a match for the Three Lions. Doubles. #ESPENG

- This was England’s first victory – and first goals – in an away match against Spain since February 1987, when Gary Lineker scored all four goals in a 4-2 victory.
- Spain lost their first competitive home international since June 2003 vs Greece, ending a run of 38 games without defeat.
- This was the first time in their history Spain had conceded three or more goals in a competitive home international match.
- England scored with all three of their shots on target in the opening 45 minutes – they didn’t have a single effort on goal in the second half.
- Sterling’s goal was his first for England since netting vs Estonia in October 2015 – ending a run of 1825 minutes and 27 games without one.
- Rashford has scored three goals in his last four appearances for England – as many as he had in his previous 25.
- Kane has been directly involved in 39 per cent of the 44 goals England have scored under Southgate (14 goals, 3 assists).

Spain's final Nations League group outing in a month's time sees them face a potentially tricky trip to Croatia, who will no doubt be eager to avenge their 6-0 drubbing in Elche last month. On the same day, England will face United States in a friendly, preparing for their last group game at home to Zlatko Dalic's men on November 18.