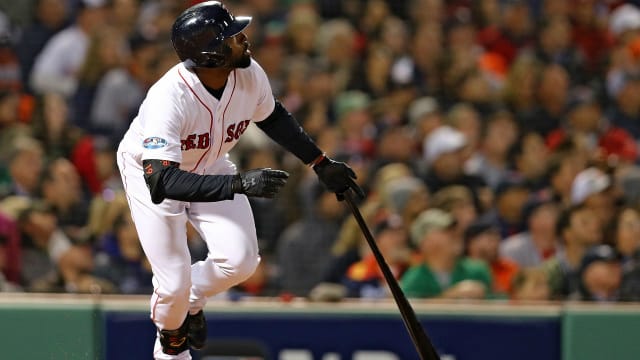 The American League Championship Series (ALCS) is tied at 1-1 after the Boston Red Sox beat the Houston Astros 7-5 on Sunday.

The game went back-and-forth in the first two innings, but the Red Sox took control in the third and held on at Fenway Park.

The series will now shift to Houston for the next three contests, beginning on Tuesday with game three. Dallas Keuchel is scheduled to take the mound for the Astros while the Red Sox have yet to announce a starter.

Houston topped the Red Sox 7-2 in the series opener on Saturday.

The battle of "one, ones" doesn't live up to the hype

Game two was the first time ever two number one overall picks started against each other in the postseason. The matchup did not live up to the hype.

Gerrit Cole – the top pick in the 2011 draft – took the mound for the Astros and was shaky early, as he surrendered five runs in the first three innings.

Meanwhile, David Price – who was selected number one in 2007 – also struggled in the early going. He allowed the Astros to tie the score in the top of the second and Marwin Gonzalez belted a two-run homer off him one inning later.

Marwin WAY over the monster. #ALCSpic.twitter.com/rnHMPJU913

Both pitchers settled down a bit. Price was removed after 4.2 innings on the mound while Cole lasted six.

Boston's bullpen get the job done

The Red Sox needed their relievers to record 13 outs after Price's up-and-down performance. They delivered the victory.

Three Boston pitchers combined to throw 3.1 scoreless innings behind Price. They did not surrender a hit and Ryan Brasier allowed the only base runner when he walked Alex Bregman with two outs in the seventh.

Red Sox closer Craig Kimbrel entered in the ninth and recorded two straight outs. He then allowed a double to George Springer and a single to Jose Altuve, which cut the Astros' deficit to two.

Kimbrel, however, induced a fly out from Bregman to secure the win.

Jackie Bradley Jr. gave the Red Sox the lead for good in the third inning.

The 28-year-old outfielder stepped to the plate with the bases loaded and two outs. He took the first two pitches for balls and swung through a fastball before sending a line drive over the head of Gonzalez, the Astros left fielder.

The ball bounced off the Green Monster and rolled awkwardly off the side wall before it was corralled by Gonzalez. By that time, Bradley was standing on second base and the Red Sox had a 5-4 lead, as all three baserunners scored.

The @RedSox strike back. #ALCSpic.twitter.com/80ned6VT7c

Boston added an insurance run when Mookie Betts scored on a wild pitch in the seventh inning. Betts then tallied an RBI single one frame later.