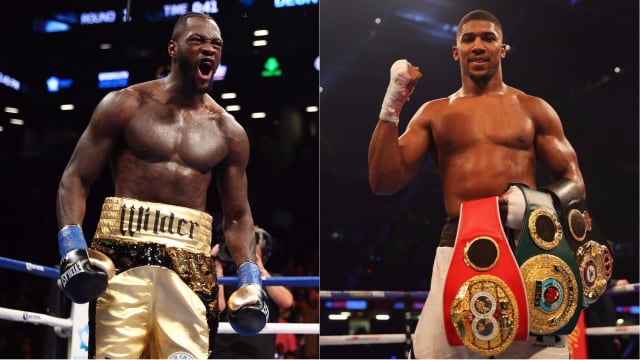 Eddie Hearn revealed he has made "significant" progress in talks over a fight between Anthony Joshua and Deontay Wilder and hopes to conclude a deal after the American fights Tyson Fury.

Hearn, Joshua's promoter, has made no secret of his frustration at being unable to get around the table for negotiations with Wilder's team over a heavyweight unification bout.

Wilder will defend his WBC title against Fury in Las Vegas on December 1 after Joshua retained his IBF, WBO and WBA straps with a knockout of Alexander Povetkin at Wembley last month.

Hearn has been in dialogue with Al Haymon, a member of Wilder's advisory team, and is more optimistic an agreement can be reached.

He told Sky Sports: "We are kind of talking to Al Haymon and some legal guys on his side. There are people that want to help and make this fight happen.

"Even in Chicago, I had a couple of conversations over two days with someone who felt they could help and it was so productive. We were talking about splits and numbers. It's so natural to do that.

"He's a powerful player in the world of boxing and has the ears of Wilder's team. He probably feels like there needs to be a mediator to say, 'I spoke to Eddie, this is interesting, how do you feel?'

Hearn added: "I'm not saying it's done, but we made progress because we had a conversation. I want to be in a position where, by December 1, we are done or almost done.

"We just have to watch the fight and sign the deal after. There's still a lot of work to do, but at least there's conversation and at least we are discussing the deal points.

"I think everyone wants the fight. The attitude of Shelly is 'we're not making that fight, they're not serious.' Why do they think we keep coming back to the table? It's not for a laugh or to look good. I wouldn't bother.

"We want to fight Wilder. That's why we are the ones continually and consistently making the effort. Progress is significant in the fact we are talking. In terms of actual progress, it's small. Once the communication lines are open, that's positive, that's all I can say.

"Maybe it's a breakthrough, they'll come back. All we want is for their team to come back if they don't like the offer and tell us why not, so we can try and make it work. By just saying, 'no, we're not going to talk', how do you even have a chance to make the fight?"