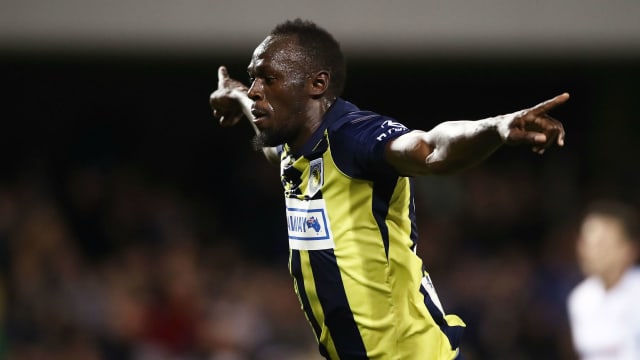 Usain Bolt scored twice on his first start for Central Coast Mariners and must now wait to see if he has done enough to earn a deal with the A-League club.

The eight-time Olympic champion was named in the Mariners' starting line-up against Macarthur South West United on Friday, with Mike Mulvey's men running out comfortable winners.

He converted with a neat left-footed finish and a tap-in during the second half after goals from Ross McCormack and Jordan Murray had put the visitors in control in Sydney.

With the Mariners' league season beginning a week on Sunday against Brisbane Roar, it remains to be seen if Bolt will be offered a permanent deal ahead of the competitive fixtures beginning.

He's done it! @usainbolt scores his first goal for @CCMariners

Bolt made a promising start and was chased down as he looked to race through on goal in the opening few minutes, before he played a role in the opener.

His dart to the near post created space for McCormack, who confidently headed home his first goal in Mariners colours from fellow new signing Tommy Oar's delivery.

The sprint king was left prone on the turf after being kicked in the groin by Tom Whiteside, but picked himself up and got a first shot away midway through the half.

In attempting to play the ball back to a team-mate, Bolt got a fortuitous deflection off an opponent and quickly latched onto the loose ball inside the area, only to see his shot blocked.

The hosts should have levelled through Glen Trifiro, but he fluffed his lines and fired a rushed effort over the crossbar from 12 yards.

A glorious opportunity came and went for Bolt just before the interval as he headed wide from Oar's searching cross, with Murray showing him how it should be done soon after.

Bolt headed a McCormack cross over the bar and failed to connect from close range with a volley as he continued his pursuit of a goal in the second half, which finally bore fruit in the 55th minute.

After collecting McCormack's ball over the top, Bolt held off his man and drove a low shot in at the near post, celebrating with his trademark lightning bolt pose.

The 32-year-old doubled his tally with a simple 69th minute tap-in and was substituted six minutes later, having boosted his hopes of earning a prolonged stay with the Mariners.