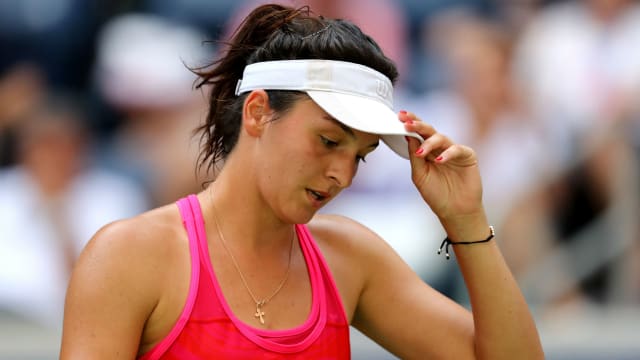 Margarita Gasparyan continued her recent run of good form with a hard-fought victory over Kiki Bertens at the Linz Open.

Russian Gasparyan - whose career was held up by multiple knee surgeries - prevailed 7-5 2-6 7-6 (7-3) to reach the last eight and deal a blow to her opponent's hopes of reaching the WTA Finals.

Bertens needed to make the quarter-finals in Austria to potentially move ahead of the eighth-ranked Karolina Pliskova in the race to qualify for the season-ending tournament in Singapore.

However, the second seed failed to take any of the break-point opportunities she created in a tense decider, allowing the determined Gasparyan to record her first career victory over a top-10 rival.

The 24-year-old from Moscow claimed her second WTA Tour title in Tashkent last month and will next face fifth seed Camila Giorgi.

Margarita Gasparyan scores her 1st Top 10 win, comes back from a break down in the third and digs out of 15-40 and 0-40 in back-to-back service games, to beat No.10 Kiki Bertens @WTALinz.

Ekaterina Alexandrova rallied from a set down to see off Johanna Larsson 3-6 6-1 6-1, while Andrea Petkovic won her all-German clash with Tatjana Maria 6-1 6-3.