Djokovic dazzles but Del Potro feels the strain in Shanghai 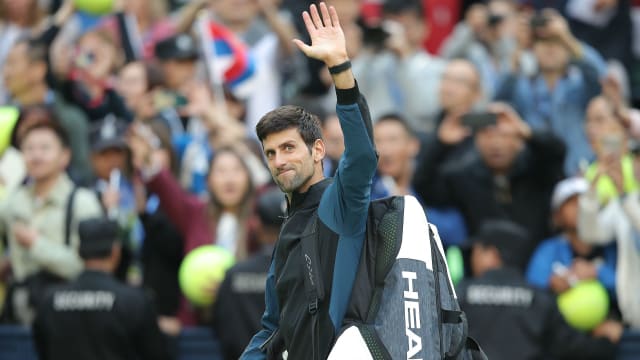 Novak Djokovic and Roger Federer progressed in contrasting fashion at the Shanghai Masters but Juan Martin del Potro's bid for glory in China came to a painful end on Thursday.

A red-hot Djokovic eased to a 6-4 6-0 victory over Marco Cecchinato, avenging a surprise defeat against the Italian at the quarter-final stage of this year's French Open.

However, having needed three sets to see off Daniil Medvedev in the second round, Federer once again had to go the distance to reach the last eight, this time prevailing 6-3 2-6 6-4 at Roberto Bautista Agut's expense.

Del Potro, meanwhile, was forced to retire due to injury during his clash with Borna Coric, who will next face unseeded Australian Matthew Ebden - conqueror of Peter Gojowczyk - for a place in the last four.

Yet it was a good day for the big names on the whole in China, seeds Alexander Zverev, Kevin Anderson, Kei Nishikori and Kyle Edmund all winning in straight sets.

The last time Djokovic and Cecchinato faced each other, the former was the number 22 in the world and still yet to find his best form after a long, arduous battle to overcome a problematic elbow injury.

Since that defeat, however, the 31-year-old has risen rapidly up the world rankings, aided by his grand slam triumphs at Wimbledon and the US Open.

He sparkled in Shanghai on Thursday, needing just 70 minutes to see off the man who ended his hopes at Roland Garros and set up a repeat of this year's final at SW19 against Anderson.

"I'm really pleased with the way I have been using my serve accurately and effectively in the first two matches, which is very important," Djokovic told the ATP Tour website.

"I was making him play always an extra shot. I was aggressive when I needed to be. The second set was perfect, really. I'm really glad to be able to finish the match the way I did."

@DjokerNole has a message for those affected by the recent tragic events in Majorca. pic.twitter.com/IwW1v3r1Hp

Del Potro picked up a cold competing at the China Open, where he surprisingly lost to Nikoloz Basilashvili in the final, and the Argentine admitted after his win over Richard Gasquet on Wednesday that he was still not at full health.

However, the third seed was hit by a new issue against Coric, as a right knee problem forced him to retire after a nasty fall towards the end of the first set.

Still, Del Potro does not have to worry about ranking points too much, as he is already certain to be playing at the ATP Finals in London, along with Rafael Nadal, Federer and Djokovic.

Zverev needs just one more win to join the quartet, the German having brushed aside Alex de Minaur 6-1 6-4.

A Brit stands in his way of securing qualification for London, Edmund reaching the last eight thanks to a 7-6 (7-5) 6-3 result against Nicolas Jarry of Chile.