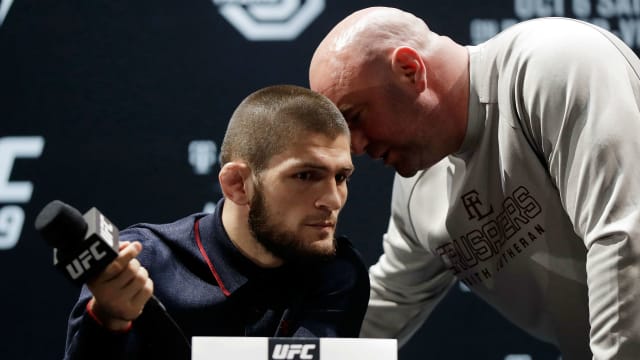 Floyd Mayweather Jr has described Khabib Nurmagomedov as "very unprofessional" for his actions at UFC 229 and expects the Russian to be handed a heavy fine.

Nurmagomedov retained his lightweight belt by forcing Conor McGregor to tap out in the fourth round of Saturday's hotly anticipated and highly charged bout in Las Vegas.

But his impressive victory was marred as he subsequently jumped out of the octagon to confront McGregor's stable-mate Dillon Danis, sparking a mass brawl.

During the melee, two individuals made their way into the ring to take on McGregor before the ugly scenes were eventually calmed and both fighters were escorted from the arena.

Nurmagomedov has seen his share of the purse withheld and has been warned he could be stripped of his belt.

And boxing legend Mayweather - who defeated McGregor in the Irishman's sole foray into the squared circle in August 2017 - says the lightweight champion can anticipate a massive financial penalty.

"I'm not too familiar with the guy McGregor was fighting, but I know the guy he was facing was undefeated," Mayweather told ITP Live.

"McGregor is a tough competitor but McGregor's opponent jumped out of the ring and was fighting people in the crowd so, very unprofessional.

"It's going to be a huge fine I'm pretty sure because with my fight against Zab Judah [in April 2006], there was a crazy melee in the ring and a huge penalty - a huge fine. If I'm not mistaken, seven figures.

"Not to me, but could have been to Zab Judah or my uncle Roger or even [Mayweather's manager] Leonard Ellerbe, so I know when a guy's jumping out of the cage into the audience and fighting different people, the fine is going to be crazy."