Griezmann, Mbappe and Varane tipped for Ballon d'Or by Deschamps 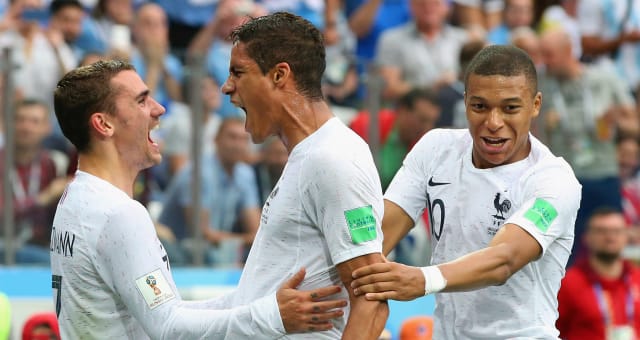 Didier Deschamps hopes a Frenchman will win the Ballon d'Or and named Antoine Griezmann, Raphael Varane and Kylian Mbappe as players he feels deserve it.

The trio were instrumental in delivering France's second World Cup triumph in Russia but Deschamps pointed to the trophies they won at club level when giving them his backing.

Griezmann, who chose to stay at Atletico Madrid rather than join Barcelona in the close season, triumphed in the Europa League in 2017-18, while Varane was part of the Real Madrid side that won a third consecutive Champions League title.

Mbappe, meanwhile, helped Paris Saint-Germain to a clean sweep of domestic trophies in his first season at the club.

When asked whether he would be upset not to see a member of his France side win the Ballon d'Or, Deschamps told La Gazzetta dello Sport: "It would be a disappointment, not only because of the World Cup, but also because many of them, from Griezmann to Varane to Mbappe, have won other important titles with their clubs.

"Anyone who wins the Ballon d'Or will deserve it. I hope it is a Frenchman."

Turning his attention to his former club Juventus, where he won three Serie A titles over a five-year period and returned as coach following their enforced relegation to Serie B, Deschamps backed the Bianconeri to capture the Champions League title that has eluded them for over 22 years.

"Dreams are part of life," he said. "Maybe the fans had not dreamed of Ronaldo, who then arrived. Sometimes dreams come true.

"Juve today are back at the top in Italy and Europe. Winning the Champions League is like winning a World Cup.

"Indeed, at the beginning, in the Champions League you have even more contenders, those seven, eight teams that can legitimately aspire to go all the way.

"Allegri's team is as competitive as the one I played in."