Federer pushed all the way by Medvedev, Zverev on course for London 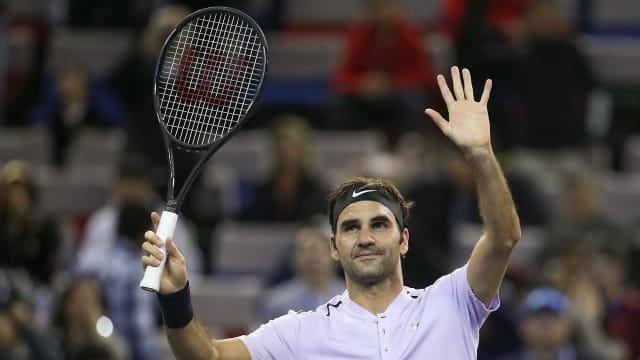 Defending champion Roger Federer overcame the in-form Daniil Medvedev while Alexander Zverev took another stride towards the ATP Finals by beating Nikoloz Basilashvili in the second round of the Shanghai Masters.

Federer was pushed all the way by Medvedev, but the top seed will face Roberto Bautista Agut in round three after winning 6-4 4-6 6-4 in the final match on Wednesday.

Zverev will qualify for the season-ending tournament in London if he reaches the semi-finals this week and he remains on course to do just that after seeing off Basilashvili 7-5 6-4.

Juan Martin del Potro, who could move above Federer in the rankings into second spot if he wins the title, provided Novak Djokovic does not advance to the last four, progressed with a 7-5 7-6 (9-7) defeat of Richard Gasquet.

Kevin Anderson, another player in the hunt for an ATP Finals spot, also moved into the last 16, along with Kei Nishikori, Stefanos Tsitsipas, Kyle Edmund, Marco Cecchinato, Sam Querrey and Alex de Minaur.

Medvedev said he would be realising a dream by facing Federer for the first time.

The in-form Russian might have been pinching himself when he took the legendary Swiss to a deciding set, but there was to be no upset.

Federer won 71 per cent of points behind his first serve, breaking three times to go through after one hour and 52 minutes on court.

The 20-time grand slam champion will stay second in the rankings if he wins the title and Djokovic fails to reach the final.

UNWELL ZVEREV BRINGS BASILASHVILI BACK DOWN TO EARTH

Zverev is a man on a mission as he strives to seal one of the four remaining ATP Finals berths.

The German revealed he is feeling under the weather in China, but Basilashvili was unable to take advantage after a surprise win over Del Potro secured him the China Open title on Sunday.

"I played alright," said Zverev, who will come up against De Minaur next. "I played a solid match. I did everything that I needed to win. Focused a lot, focused on my game.

"I'm a little sick right now, so feeling a little bit low energy, but I hope it will get better over the next few days."

Cecchinato will be braced to take on a player intent on revenge when he meets Djokovic in the third round.

Cecchinato trailed 3-1 in the final set and 4-1 in the deciding tie-break, but rallied on both occasions to avoid an early exit.

The 16th seed will have to raise his game against Djokovic, who was fuming after suffering a shock loss to the Palermo native in the quarter-finals of the French Open in June.