The numbers behind Barca, United, Bayern and Madrid's struggles 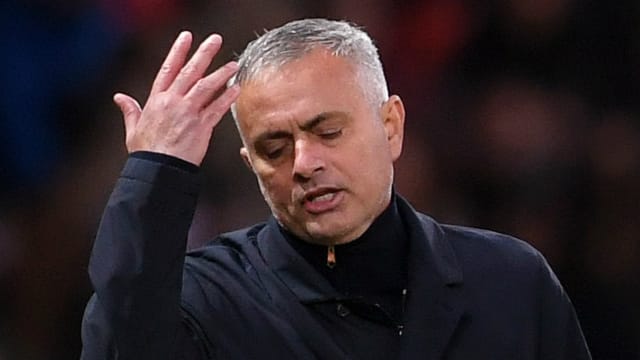 From the crisis engulfing Jose Mourinho at Manchester United to Barcelona and Real Madrid trailing Sevilla in LaLiga, the 2018-19 season has seen some of Europe's top clubs struggle.

While the board at Old Trafford are reportedly contemplating Mourinho's future, pressure is also building at the Santiago Bernabeu where Julen Lopetegui is without a win in his last four matches in all competitions.

Reigning LaLiga champions Barcelona are in a similarly indifferent spell of form, while Bayern Munich are sixth in the Bundesliga following a humiliating 3-0 defeat at home to Borussia Monchengladbach in their last outing.

Opta's stats provide a telling insight into the key areas in which these four giants of European football are failing in this campaign when compared to their performances last season.

Barcelona's 4-2 Champions League win over Tottenham will have eased the pressure on Ernesto Valverde, who has watched his team stutter in the league in recent weeks.

With three draws and a defeat from their last four league games, Barcelona's performances have been undermined by an increase in defensive errors.

Valverde's men made just one error leading to a goal throughout last season, but this campaign they have already committed three.

0 - Barcelona are winless in their last three La Liga games (D2 L1) – the last time they went four in a row without a win was in April 2016 (D1 L3). Defiance. pic.twitter.com/kmfAroNUag

After starting the season in fine form, Bayern are on a downward spiral, taking one point from their last three Bundesliga games.

Boss Niko Kovac will be asking questions of his forwards after Bayern failed to find the net in consecutive league defeats to Hertha Berlin and Borussia Monchengladbach, and they have gone from averaging 2.7 goals per game last season to 1.7 this season.

4 - For the first time since 1999 Bayern have failed to win four competitive games in a row during the Oktoberfest. Crisis. #FCBBMG

The win moved Mourinho's men up to eighth in the Premier League after eight games following a hugely disappointing start to the season that has seen them perform worse than they did in 2017-18 in a number of key metrics.

But a more porous defence has been perhaps a bigger issue for Mourinho's side, who have conceded an average of 1.8 goals per game this season compared to 0.7 last campaign, and faced an average of 4.8 shots per match compared to 3.9 the previous season.

2 - Manchester United have conceded two goals in the opening 10 minutes of a Premier League game at Old Trafford for the very first time. Lapse. #MUNNEW pic.twitter.com/MYfwePAnGN

Madrid goals hard to come by in post-Ronaldo era

Lopetegui must have thought he had inherited an easy life when his Real Madrid side clocked up their fourth win in five LaLiga games with a 1-0 victory over Espanyol on September 22.

However, since then Los Blancos have slipped to away defeats at Sevilla and Deportivo Alaves, either side of a draw at home to Atletico Madrid, and the stats tell an unhappy story for Lopetegui.

Under Zinedine Zidane - and with Cristiano Ronaldo in the team last season - Madrid averaged 7.5 shots on target per game but that number has dropped to 5.6 this season, with their conversion rate also dropping from 13.5 to 9.2.

The result has been a decline in the team's average goals per game from 2.5 to 1.5, and when margins are as narrow as they were in Madrid's defeat to Alaves, that change can be crucial.

1985 - Real Madrid have failed to score in four consecutive games in all competitions for the first time since April 1985 (five), their worst run ever. Drought pic.twitter.com/Hrej7ojkM4