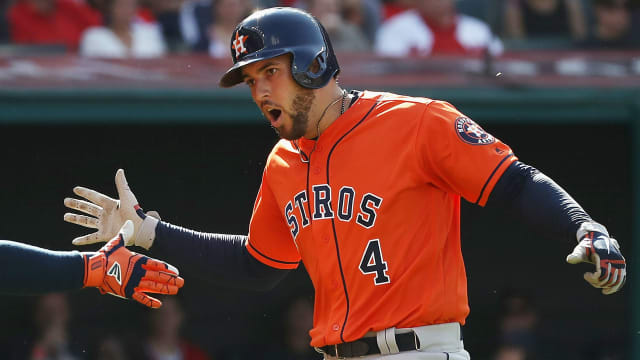 The Houston Astros made quick work of Cleveland in the American League Division Series (ALDS), sweeping the Indians after an 11-3 win in game three.

The Astros, the team that made everything look so easy during a 103-win regular season, eased through the ALDS.

Houston now move on for the second straight year to the American League Championship Series, where they will face the winners of the Boston Red Sox-New York Yankees series.

During the regular season, George Springer is a two-time All-Star and a vital cog at the top of the Astros' order. But in the postseason, Springer looks like a first-ballot Hall of Famer. Hyperbole, perhaps, but Springer is once again having a beastly postseason. The 2017 World Series MVP homered twice against the Indians in game three and finished the series with three home runs, going six-for-14 at the plate.

Springer now has 10 postseason home runs – an Astros record – in 27 games. No-one expected what he did in the World Series last year (five home runs, 1.471 OPS) and to expect him to continue at that level this postseason is unreasonable. But he did in the ALDS.

#Postseason Springer is a BEAST. pic.twitter.com/sZYZMC6MRB

The Astros shortstop has been mired in a terrible slump lately. He hit .180 from August 10 through the end of the regular season, and was hitless in seven at-bats in the first two games of the ALDS. But manager A.J. Hinch said after game two he still had faith in Correa.

"I know we put so much pressure on this guy, and there's so much attention on what he's doing and not doing," Hinch said. "He's a winning player and can help us win. I think his swing has been good. His results haven't been there. But there's no chance that I'm going to lose faith in that, in an at-bat where he comes up that he can't do something positive."

Correa started game three 0-for-two, but came up in the eighth with the Astros in control. With the pressure off, Correa took a Brad Hand pitch to the opposite field bleachers for a three-run home run. Maybe that is the spark Correa needs to get back on track at the plate. He is certainly a much better hitter than he has showed in recent weeks, and he looks like he is putting the back issues that landed him on the DL behind him. That is good news for the Astros, who really need Correa to get going in what will be a tough ALCS matchup.

After a strong five innings from starter Mike Clevinger (nine strikeouts, one earned run), the Indians turned to Trevor Bauer to protect a 2-1 lead. Making his third appearance of the ALDS, Bauer has been outstanding for Cleveland this year, but he picked a bad time for a bad outing. Bauer gave up three runs in 1.1 innings of work. Although he gave up four hits, much of the damage he incurred in that three-run seventh inning was self-inflicted. He picked up his first error on an errant pickoff throw to first. Then, when Alex Bregman sent an easy bouncer back to the mound, Bauer picked up another throwing error with a bad throw to second base.

It should have been an easy double play that would have stopped the bleeding and kept the score tied at two. Instead, two more runs scored, and Bauer's day was done.