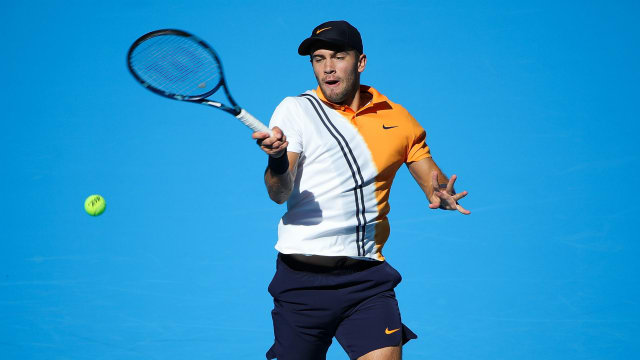 Borna Coric came from a set down to knock Stan Wawrinka out of the Shanghai Masters, while Milos Raonic and Nick Kyrgios were among those also eliminated.

Wawrinka, who is trying to discover his form following knee surgery, took the opener 6-4 but 13th seed Coric roared back and won his 32nd match of the season.

Raonic and Kyrgios were both ousted in three sets by Mackenzie McDonald and fellow American qualifier Bradley Klahn respectively, but 10th seed Stefanos Tsitsipas was able to progress courtesy of a 7-6 (7-4) 4-6 6-4 success over Gael Monfils.

It had appeared as though three-time grand slam champion Wawrinka was rediscovering his touch in recent tournaments.

The world number 69 made it to the semi-finals of the St Petersburg Open last month, having beaten Grigor Dimitrov at the US Open in his previous competition, but a second-round defeat in Japan last week preceded this latest setback on Monday.

Wawrinka had chances - he had two break points at 3-3 in the second set - but Coric secured his first ever victory over the Swiss having won the first four games in the decider.

@borna_coric recovers from a set down to defeat Stan Wawrinka, for the first time in four meetings, 4-6, 6-4, 6-3 in Shanghai. pic.twitter.com/A32EuB1HQK

It took two hours and 22 minutes for Tsitsipas to overcome Monfils but the 20-year-old Greek came through the first-round test to book a match against Karen Khachanov.

He had to dig deep initially, saving three set points on his serve at 5-6 in the opener, before securing the win via Monfils' fifth double fault.

The @nextgenfinals qualifier defeats Gael Monfils 7-6(4), 4-6, 6-4 in a thrilling first-round match in Shanghai.

How far do you think the Greek can go this week? pic.twitter.com/1l3SLCvOId

Chardy through to face Djokovic

Second seed Djokovic learned that his first opponent in Shanghai will be Jeremy Chardy after the Frenchman beat Maximilian Marterer 6-3 7-6 (7-5).

The Serbian has won all 11 previous meetings between the two so will fancy his chances of advancing at a tournament where Roger Federer is the top seed.