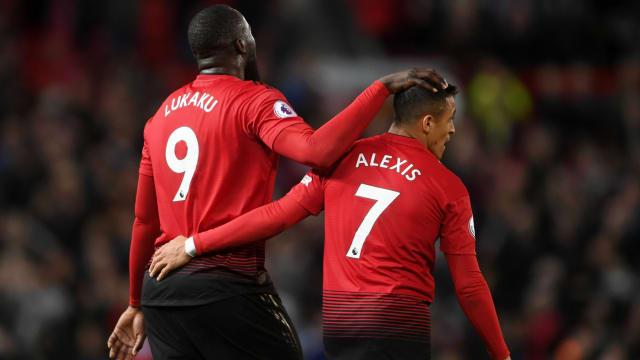 Romelu Lukaku described Alexis Sanchez as one of the hardest-working players he has seen after watching him score the winning goal for Manchester United against Newcastle United on Saturday.

The home side battled from 2-0 down to win 3-2 at Old Trafford and alleviate some of the pressure on manager Jose Mourinho.

Sanchez has struggled for form since joining from Arsenal in January but came off the bench to head home in the 90th minute and end his side's four-game winless run.

And Lukaku was full of praise for his team-mate's determination after he netted for the first time this season.

"I would have wanted to have been in his shoes, but the guy is working really hard," Lukaku told MUTV.

"I think he's one of the most hard-working professionals I have ever seen and to give us the win, he deserves it and I am really happy for him."

This man has scored three 90th-minute winners since 2016/17 - but his latest was by far our favourite #MUFC#MUNNEWpic.twitter.com/cEKdAO09NW

United found themselves 2-0 down after just nine minutes thanks to goals from Kenedy and Yoshinori Muto but roared back in the second half to claim the win courtesy of Juan Mata, Anthony Martial and Sanchez.

Full-back Luke Shaw hopes the result will inject some confidence into the Chile forward, and the rest of the team, ahead of tough tests against Chelsea and Juventus after the international break.

"It's massive," he said. "As football players, confidence is something you need when you step onto the pitch. You need to believe in yourself, you need to have that confidence to do things and we know how much of a special player he is and today could have been a massive confidence boost."