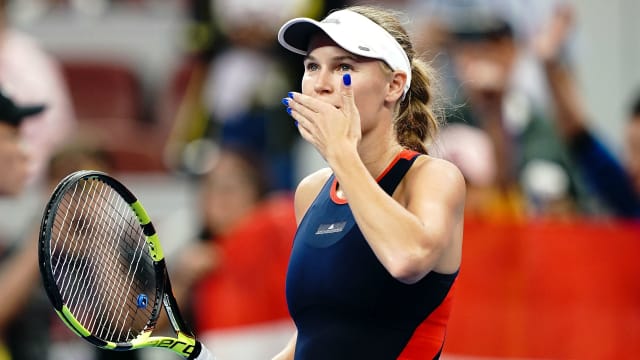 Caroline Wozniacki disappointed the partisan crowd at the China Open with a straight-sets win over Wang Qiang in Saturday's second semi-final.

The Dane, champion in Beijing in 2010, eased into this year's decider against Anastasija Sevastova with an impressive 6-1 6-3 success to end her opponent's hopes of a third title in 2018.

Wozniacki, victorious at the Australian Open at the start of the year, has looked in ominous form as she prepares to defender her WTA Finals crown in Singapore at the end of the season.

Like Wang, the second seed came into this encounter without dropping a set and she will take that unblemished record into Sunday's meeting with Sevastova, who earlier in the day saw off US Open champion Naomi Osaka to reach her first WTA Premier final.

Wang's quarter-final win over Aryna Sabalenka was her 16th from her last 18 matches in her homeland, but she found herself under early pressure here and was broken in her opening service game when she netted a backhand.

Wozniacki produced a big hold for 4-1, saving three break points along the way, and to rub further salt in the wound Wang was duly broken to love in the next as the first set slipped away.

It looked as though the second would go much the same way as Wozniacki took a 2-0 lead, but the world number two soon relinquished her advantage in erring on the backhand side as Wang got back on serve at 2-2.

However, at 3-3 Wozniacki produced a moment of magic to set up three break points with a superb backhand pass on the run before Wang double faulted, the Dane wasting little time in reeling off the next two games to earn a place in her 54th career final.