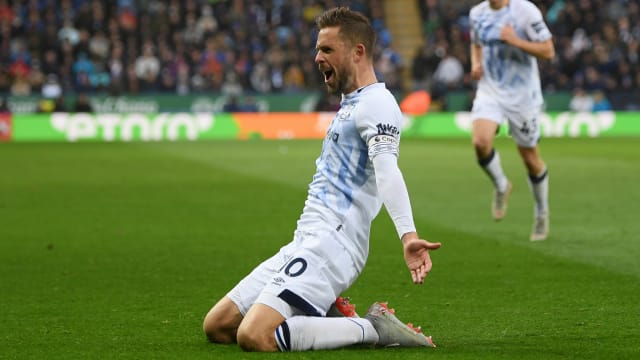 Gylfi Sigurdsson scored a brilliant late winner to hand Everton a 2-1 victory over 10-man Leicester City, their first away win of the Premier League season.

Richarlison's fourth goal of the campaign in the seventh minute gave Marco Silva's men an ideal start, although Ricardo Pereira's first strike for Leicester five minutes before the break levelled the match.

Everton looked like favourites once again when Leicester captain Wes Morgan received his second red card of the season midway through the second half, and Sigurdsson's stunning 30-yard strike – his 50th in the Premier League - proved decisive with 13 minutes remaining.

Bernard wasted no time to make an impact on his first top-flight start, twisting his way past Pereira and Daniel Amartey and sending in a threatening delivery that compatriot Richarlison volleyed in from six yards, despite Kasper Schmeichel getting a hand on the cross.

Leicester recovered their poise from there and should have equalised, only for Jamie Vardy to fire a poor shot wide when he was sent clean through on goal by Wilfred Ndidi.

But the next Leicester counter-attack did produce an equaliser as Pereira, having been fed by Kelechi Iheanacho down the left, turned Jonjoe Kenny inside out and may have been surprised to see his left-footed effort beat Jordan Pickford at the Everton goalkeeper's near post.

Leicester's chances of victory took a hit in the 63rd minute when Morgan received a second yellow card for a challenge through the back of Richarlison, who he had also hauled down for his first booking just before the break.

And there was nothing Schmeichel could do when Sigurdsson received a pass from Kurt Zouma, beat James Maddison with a Cruyff turn and unleashed a magnificent, dipping strike from into the top-left corner – his fourth goal in as many Premier League games clinching the win.