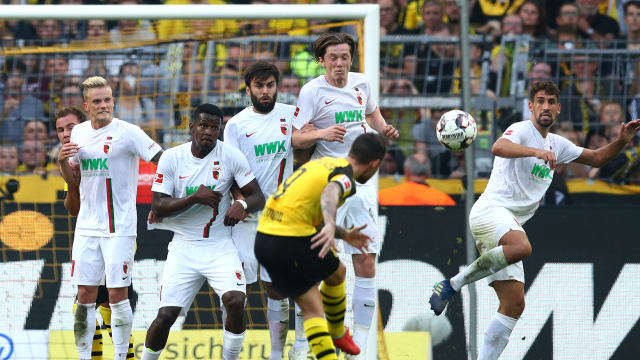 Paco Alcacer matched a long-standing Bundesliga record after he came off the bench to score a hat-trick in Borussia Dortmund's remarkable 4-3 victory over Augsburg.

Having come on as a substitute just before the hour with Dortmund 1-0 down, the Barcelona loanee became the first player to score six goals in his first three Bundesliga appearances since Hamburg's Gert Dorfel in 1963.

Alcacer netted his first within three minutes of his introduction, and Dortmund's striker was on target again in the 80th minute to cancel out Augsburg's second, which had come from Philipp Max.

Goals from Mario Gotze and Michael Gregoritsch maintained the frantic pace, setting the stage for Alcacer to have the final word.

6 - @paco93alcacer (@BVB) is the only player beside Gert Dörfel (Hamburg, 1963) to score 6 goals in his first 3 #Bundesliga appearances. Historic. #BVBFCApic.twitter.com/GNvfUHIs2D

And the winner, which came around 90 seconds past the allotted amount of stoppage time, did not disappoint – the former Valencia man completing his hat-trick with a superb, dipping free-kick that nestled in the right-hand corner, moving Dortmund three points clear at the top.