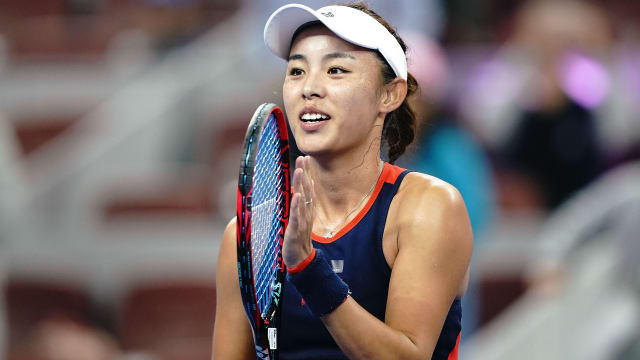 Wang Qiang will face Caroline Wozniacki in the semi-finals of the China Open after halting Aryna Sabalenka's eight-match winning run.

Chinese number one Wang ended Sabalenka's hopes of qualifying for the WTA Finals in Singapore by pulling off a 7-5 7-5 victory on Friday.

Sabalenka was crowned Wuhan Open champion last weekend, but the 20-year-old was brought back down to earth by an inspired Wang.

The world number 28, who also reached the last four in Wuhan, has now won 16 of her last 18 matches on her homeland after breaking four times and making only 12 unforced errors.

Sabalenka charged ominously into a 3-0 lead in the last quarter-final, but Wang came storming back and ended a pulsating contest when her opponent netted a forehand, tossing her racket away in disgust.

Wang Qiang keeps on rolling - into the @chinaopen semifinals!

Beats Sabalenka 7-5, 7-5 in a wonderful match!#ChinaOpenpic.twitter.com/dpiFpZUUgh

Wozniacki has looked much more liked an Australian Open champion this week, returning to form to seal her place in the WTA Finals.

The second seed was a cut above qualifier Katerina Siniakova, serving superbly in a 6-2 6-2 win.

Naomi Osaka will face Anastasija Sevastova in the other semi-final after the US Open champion fought back to see off Zhang Shuai 3-6 6-4 7-5.

Sevastova got the better of an in-form Dominika Cibulkova, winning 6-3 7-6 (7-5) to reach her sixth semi-final of an impressive season.