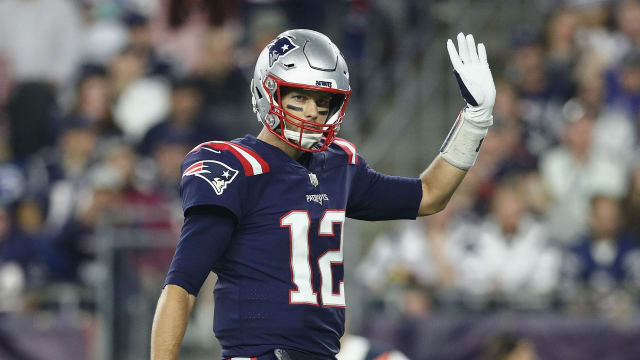 Tom Brady stressed he had plenty of New England Patriots team-mates to thank for becoming just the third NFL quarterback to throw for 500 regular-season touchdown passes.

The 41-year-old joined Peyton Manning and Brett Favre as the only men to have reached the milestone with three TDs in the Patriots' 38-24 victory over the Indianapolis Colts on Thursday night.

"Things like that, milestones and so forth, there's so many people who contribute," Brady told reporters.

"I just think of all the people who have really worked hard. A quarterback doesn't throw them to himself. He needs people to catch, and block, and the defense to make plays, and coaches to coach.

"These are all great team awards. Pretty cool."

Pats head coach Bill Belichick, whose relationship with Brady has been the source of much debate in recent years, added: "It's tremendous. It's a lot of touchdown passes to a lot of different guys too. [There is] no quarterback I'd rather have than Tom Brady."

Brady's landmark pass was a 39-yard toss to wide receiver Josh Gordon, who became the 71st different player to catch a touchdown pass from the quarterback.

"To catch any pass from Tom is amazing, let alone some history-making catch," said Gordon, a recent acquisition from the Cleveland Browns.

"I told him, 'Congratulations' and I know there are many more from him to come. So I am looking forward to that and the next history point to make from him. I hope to be a part of it. It was awesome."

"It's just surreal what he's doing at his age, how he feels, just the work ethic he has and how he brings it every practice and every game," Gronkowski added.

"He just doesn't stop. It's an honour to be out on the field with him."