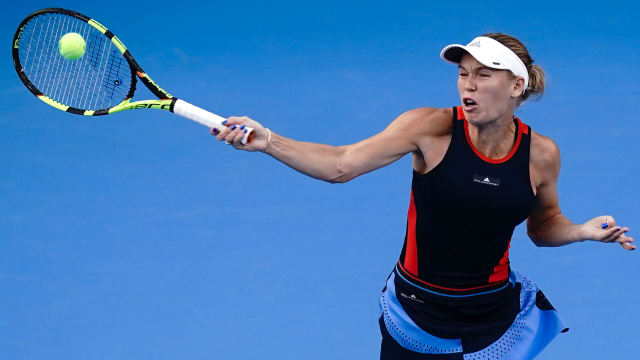 Caroline Wozniacki has her season back on track after sealing her place at the WTA Finals on Thursday, having reached the last eight of the China Open.

Wozniacki had endured a dreadful run before heading to Beijing, but a series of victories have seen her complete qualification to the season-ending tournament in Singapore.

Several other seeds did not fare quite so well on Thursday, however, as home hopefuls Zhang Shuai and Wang Qiang got the better of Angelique Kerber and Karolina Pliskova respectively.

And defending champion Caroline Garcia crashed out, too, collapsing to a 5-7 7-6 (7-3) 6-0 defeat to Aryna Sabalenka, while Kiki Bertens' 6-4 6-3 reverse to Katerina Siniakova saw Petra Kvitova also reach the WTA Finals.

World number two Wozniacki won the WTA Finals last season, but her place at this year's tournament was far from secure ahead of the China Open, having struggled for form since winning at Eastbourne in June.

The Dane's qualification was secured with a 7-5 6-4 triumph over Anett Kontaveit, though, and she now faces a favourable Beijing quarter-final against Siniakova, too.

"I'm very happy to qualify for the WTA Finals," Wozniacki said. "Winning the WTA Finals last year was a huge accomplishment for me and helped my confidence leading into this season."

The defending champ is heading back to @WTAFinalsSG !

CHINA'S STARS ON TOP IN BEIJING

Wozniacki's hopes are also boosted by the absence of several other stars, with Wimbledon champion Kerber and seventh seed Pliskova the latest to bow out. Zhang and Wang each recorded their latest upsets in some style on Thursday.

Zhang came through a rollercoaster three-set thriller with Kerber, while Wang followed up her stunning double-bagel defeat of Jelena Ostapenko by winning again in straight sets.

The former will face another tough test against US Open champion Osaka, with the latter facing Sabalenka, who fought back from a set and a break down against Garcia.

Like A Boss! Wang beats Pliskova 6-4, 6-4! Such a high level of play out there, and so much heart! History Made in Beijing: it's the first time since 2006 than two Chinese players are reaching the quarter finals here. #WellDoneLadies

Despite coming through the early rounds of the China Open with ease, Osaka had seemingly not been convinced of her form in Beijing.

But that changed with a 6-1 6-2 thrashing of 10th seed Julia Goerges, as Osaka explained: "I know I played well, better than all the other days."

She added: "I think my biggest improvement [in 2018] is mental. My game is more consistent, there are not so many unforced errors. I'm not sure how many I hit [against Goerges] but sometimes, last year, I was hitting a lot."