Wozniacki marches on in Beijing 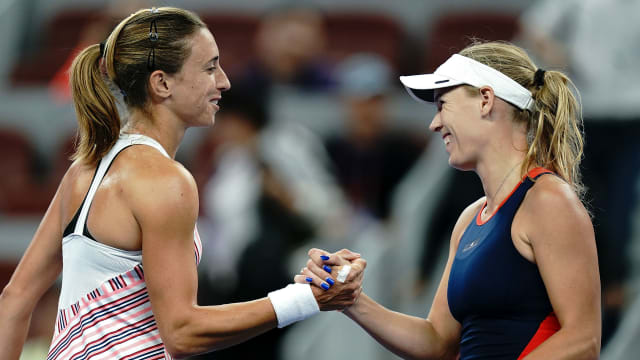 Caroline Wozniacki took another step towards securing a WTA Finals spot with a straight-sets win over Petra Martic at the China Open.

The Dane booked her place in the last 16 with a 7-5 6-3 victory and will now face Anett Kontaveit, knowing a semi-final berth will get her to Singapore.

Elsewhere in the draw, Anastasija Sevastova and Dominika Cibulkova were the first two to make the quarter-finals in Beijing, where they will face each other.

Australian Open champion Wozniacki has endured a below-par few months, including second-round exits at Wimbledon and the US Open.

But she has now posted consecutive straight-sets triumphs, which could signal a return to form.

She had the measure of world number 36 Martic and afterwards the second seed revealed her game plan and the intensity of the battle for a Finals place.

"I was just trying to stay focused and tried to run a lot of balls down, try to mix up the pace, be aggressive when I could," she said.

"I think everyone is trying to fight for Singapore. I'm just here to try and qualify, try and do my best, try and go as far in this tournament as I possibly can."

CIBULKOVA AND SEVASTOVA ONE STEP AHEAD

While everyone else was playing for a third-round place, Cibulkova and Sevastova sailed into the last eight.

Latvia's Sevastova needs to win the title in order to reach the Finals and kept her hopes alive with a 6-3 6-2 success over Donna Vekic .

That's the match!@Cibulkova comes from behind to snap a two-match losing streak against Sloane Stephens.

Both of Zhang's WTA Tour titles have come on home soil and she will be eyeing a hat-trick this week.

The 29-year-old, a two-time winner of the Guangzhou Open, thrashed Timea Babos 6-1 6-2 and will face third seed Angelique Kerber in the next round.

Pliskova, who overcame Aliaksandra Sasnovich 6-3 6-4, faces Zhang's compatriot Wang Qiang next up, having lost to her in Wuhan.