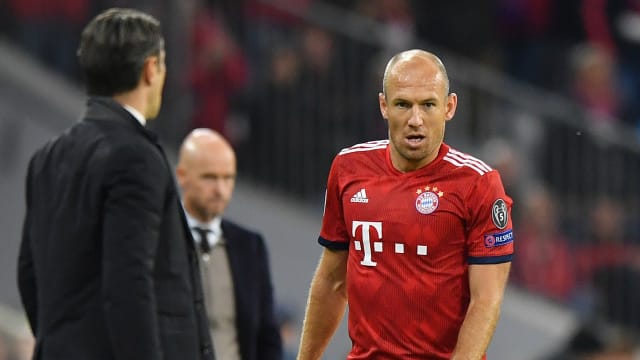 Arjen Robben insists Bayern Munich only need a victory to get back on track after the German giants surprisingly drew with Ajax in the Champions League.

There was another poor result for Niko Kovac's Bayern on Tuesday – the Bundesliga champions held to a 1-1 draw by Dutch visitors Ajax.

Bayern made a perfect start to the season, however, the Bavarians have now gone three matches without a win in all competitions after Mats Hummels' opener was cancelled out by Noussair Mazraoui.

But Robben remains calm, the veteran Dutchman telling reporters: "There is always something coming from outside. We have to be realistic and to analyse our situation properly.

"Obviously, we are not used to it and it is not our goal. But as I said, it's not possible that within a week, everything turns bad.

"But that's football, you need a victory to get back on track."

"We have to win on Saturday, whatever it takes"

Hear from the players and the boss after Tuesday night's draw...#UCL#FCBAJApic.twitter.com/D3nivO4BWn

"We were very confident and played good football, but not every game was perfect," Neuer said as he reflected on Bayern's form prior to the stuttering results.

"We were cheered very early. We also knew that we should not lose the ground under our feet.

"But we never thought that we would just march through, because you can sometimes drop points against unpleasant opponents."