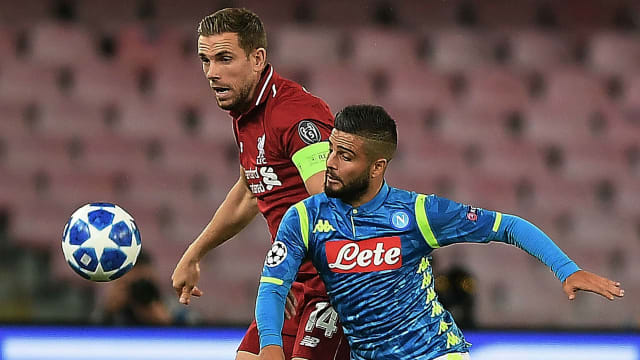 The Reds struggled to make much of an impression on the match as their blunt attack were kept quiet and Napoli finally made their superiority count at the end, moving themselves top of the early table with four points.

The first half was sadly lacking in quality, with neither goalkeeper remotely busy, but Napoli controlled proceedings and at least threatened to trouble the Reds.

They stepped things up a notch in the second period and looked as though they were going to be frustrated when Dries Mertens hit the crossbar late on, but Insigne finished Liverpool off in the final minute of normal time.

Liverpool never really got going in the first half and had a lucky escape 11 minutes in when Insigne saw a left-footed strike go agonisingly wide of the bottom-right corner.

The Reds lost Naby Keita to an apparent back injury soon after and that did little to improve their fortunes in attack.

Napoli eventually forced Alisson into action just past the half-hour mark, but Arkadiusz Milik's effort from the centre of the box was swatted away by the Brazil international.

The hosts upped the intensity a little after the break and quickly went close, Milik's 25-yard drive forcing Alisson to save down to his left.

Milik then threaded Fabian Ruiz into the box a few moments later, but Trent Alexander-Arnold produced a vital last-ditch tackle to stop him.

Liverpool looked destined to take a point when Mertens' close-range effort hit the frame of the goal, but Insigne stunned them in the 90th minute, sliding on to Jose Callejon's low cross and prodding the ball past the helpless Alisson.

What it means: Liverpool's toothlessness a surprise

While Napoli are by no means the gung-ho attacking side they were under Maurizio Sarri, Carlo Ancelotti certainly did not set his team up to contain the visitors. They were keen to attack right from the start and ordinarily that would play into the hands of Jurgen Klopp's side, but they failed to offer any inspiration in the final third.

Insigne leads from the front

Although the goal was the obvious highlight of his performance, there was so much more to Insigne's display. The diminutive attacker was everywhere, popping up on the left and in the centre frequently, with that unpredictability causing Liverpool issues. In the end, a goal and a win was the least Napoli's local star deserved.

No spark from Salah

Mohamed Salah has endured an underwhelming start to the season and he was no better in Naples. The Egyptian was generally quiet, and on the few occasions he found himself in threatening positions, he failed to do any damage.

Napoli's next Champions League outing in three weeks' time sees them travel to Paris Saint-Germain after Serie A clashes with Sassuolo and Udinese. The Reds, however, host Manchester City at the weekend in the Premier League and will then be expected to cruise past Red Star Belgrade at Anfield when European football returns at the end of the month.