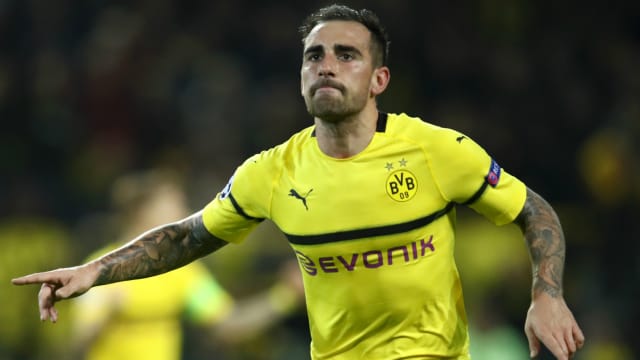 Borussia Dortmund's outstanding form continued as Paco Alcacer scored his first Champions League goal for the club after missing a penalty in a deserved 3-0 win over Monaco.

Jacob Bruun Larsen came on as a half-time substitute to score his third goal in as many appearances for Dortmund, who did not have it all their own way against a Monaco side fighting to regain form after a torrid few weeks.

Leonardo Jardim's men are without a win in nine games and have nothing to show for their European efforts so far, having lost to Atletico Madrid in their opening Group A fixture.

In contrast, Dortmund are top of the Bundesliga and growing in confidence in Europe, their victory effectively clinched by Paco Alcacer's strike after the Spaniard missed a penalty moments earlier, and Marco Reus added a third in second-half stoppage time.

Youri Tielemans curled a superb 20-yard effort towards goal as Monaco probed for an early strike, forcing an acrobatic save from Roman Burki.

Alcacer bent one around the post from just outside the box at the other end, before Marius Wolf's shot on the turn from inside the box almost gave Dortmund the lead seven minutes before half-time, but Diego Benaglio made a good reaction save.

An injury sustained while making that stop left Benaglio unable to continue, and he was replaced by Danijel Subasic.

Lucien Favre sent on Larsen for Wolf after half-time and the Dane broke the deadlock within five minutes, pouncing on Jadon Sancho's throughball and bearing down on Subasic before unleashing a low drive into the net.

Alcacer's best chance to score looked to have arrived when Kamil Glik felledReus in the box but his spot-kick hit the underside of the crossbar and bounced clear.

He made no mistake when given another opportunity moments later, gathering a pass from Reus and rounding Subasic before firing into the empty goal, and captain Reus made the result certain when he drilled Larsen's low cross into the far corner of the net.

What it means: Favre has found the winning formula

Dortmund only just edged their Champions League opener 1-0 against Club Brugge but they were in dominant mood against Monaco, buoyed by their excellent recent results in the Bundesliga.

Tipped to push for a place in Gareth Southgate's England side, Sancho was full of running and unselfish play and went close to scoring when he lifted a shot over the crossbar in the second half.

Sylla struggles to step up

Moussa Sylla showed flashes of his talent as he made his first Champions League start, but the 18-year-old winger missed an early chance for Monaco and looked a bit lost on the big stage.

Dortmund will look to maintain their place at the top of the pile in Germany when they face Augsburg on Saturday, while Monaco entertain Rennes a day later.