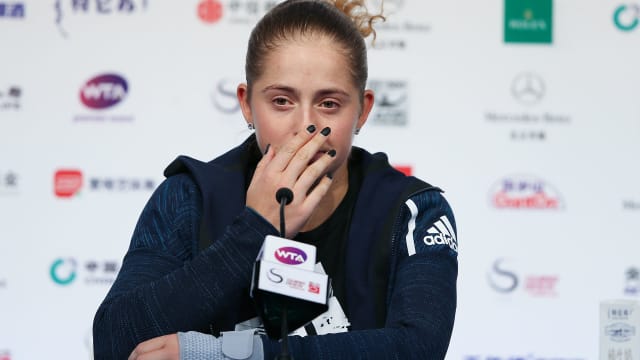 Jelena Ostapenko suffered a humiliating double bagel at the hands of Wang Qiang and the in-form Aryna Sabalenka beat Garbine Muguruza in the second round of the China Open.

Wang reached the semi-finals of the Wuhan Open after being crowned champion in Guangzhou and took just 55 minutes to beat Ostapenko - who was troubled by a wrist injury - 6-0 6-0 on Tuesday.

Sabalenka won the biggest title of her career in Wuhan on Saturday and showed no signs of fatigue as she saw off Muguruza 7-5 6-4 with another outstanding performance.

Angelique Kerber earlier battled her way past Carla Suarez Navarro 7-6 (7-4) 6-1, while US Open champion Naomi Osaka - who qualified for the WTA Finals for the first time on Monday - thrashed Danielle Collins 6-1 6-0.

Defending champion Caroline Garcia was a 7-6 (7-2) 6-3 winner against Polona Hercog, with Sloane Stephens and Kiki Bertens boosting their bids to play in Singapore by beating Zheng Saisai and Kirsten Flipkens respectively.

Fantastic match!@SabalenkaA takes it in a hard-fought battle against Muguruza, 7-5, 6-4 - but both ladies were top drawer today!#ChinaOpenpic.twitter.com/Zq1P0dELks

OSTAPENKO BLOWN AWAY BY MAGNIFICENT WANG

Wang arrived in Beijing with 14 victories in her last 17 matches and her strong finish to the season continued in her homeland.

A startled Ostapenko made 34 unforced errors and hit only six winners as she bowed out, having lost to Daria Gavrilova in the first round in Wuhan.

The 2017 French Open champion was troubled by her left wrist on Lotus Court, with Wang in top gear from the start.

Wang will take on Karolina Pliskova or Aliaksandra Sasnovich in round three.

Sabalenka claimed her second title in as many months last weekend and Muguruza felt the force of the clean-striking 20-year-old.

Up to 16th in the rankings, Sabalenka could yet feature in the season-ending showpiece in Singapore as she continues to take on all comers.

The Belarusian struck 36 winners and broke four times in a high-quality contest to book a third-round encounter with Garcia.

Muguruza was a break up in the second set, but the two-time major champion's serve let her down at key moments and she was unable to contain the promising Sabalenka.

Osaka was broken in the opening game of the match against Collins, but that was not a sign of things to come as the eighth seed blew the American away.

Stephens, seventh in the battle for Singapore spots, brushed aside home contender Zheng with a clinical 6-1 6-3 victory.

Bertens, just outside the top eight in the Race to Singapore, eased to a crushing 6-1 6-1 success over Belgian Flipkens.