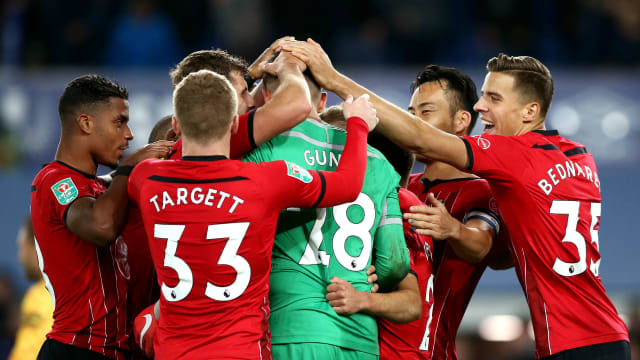 Theo Walcott went from hero to villain against former club Southampton as Everton crashed out of the EFL Cup on penalties.

Former England forward Walcott, who began his professional career with Southampton, scored an 85th-minute equaliser at Goodison Park on Tuesday to cancel out Danny Ings' strike late in the first half.

However, after Richarlison and Matt Targett had failed to score in the shootout, Walcott saw his effort from 12 yards saved by Angus Gunn and Cedric Soares duly fired home to earn Southampton a fourth-round visit to Leicester City.

Everton, who handed a full debut to Bernard, looked sharper in the opening period, but Nathan Redmond clipped the woodwork for Saints before setting up Ings for the opening goal.

Walcott came off the bench to deny Southampton victory in 90 minutes, having been played in by Oumar Niasse, but his night soon took a turn for the worse.