Storm legends Slater and Smith to be immortalised with statues 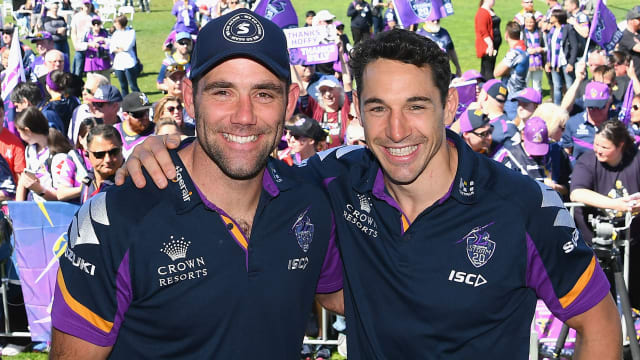 Melbourne Storm legends Billy Slater and Cameron Smith are to be immortalised with statues at AAMI Park.

Slater's illustrious career ended on a disappointing note when the Storm were beaten 21-6 by Sydney Roosters at ANZ Stadium on Sunday.

Captain Smith became the first hooker in premiership history to score 200 points in a season during what was a record 36th finals appearance in Sydney.

The skipper's future is up in the air as he is off contract, but it was revealed at a civic reception for the fans at Gosch's Paddock on Monday that both he and Slater will be recognised with statues, which will be funded by the Storm, the NRL and the state government.

STATUES FOR CAMERON & BILLY! @johnerenmp with the HUGE announcement that Cameron & Billy will be immortalised outside @AAMIPark! pic.twitter.com/9EUCTyoCu8

"My kids will be able to grow up in this town and see what their dad's done in this game and state. I'm excited to see what it looks like."

The full-back added that there is no chance he will have a change of heart and prolong his career after Storm fans chanted 'one more year'.

"I'm done, I'm done, it's my time," said Slater. "I have no doubt I could play another year but I've had my fair share of serious injuries and to be able to walk away from the game healthy and fit, I see it as a great opportunity and I've achieved everything I've set out to do.