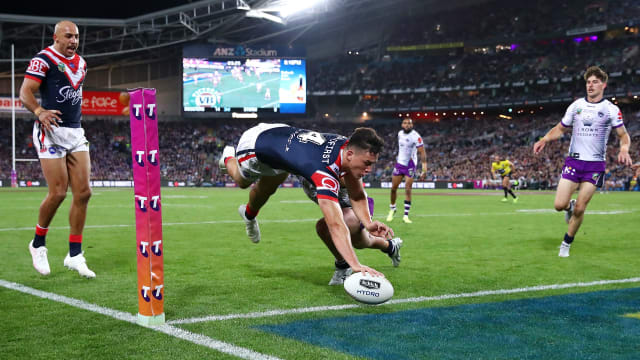 Sydney Roosters spoiled Billy Slater's Grand Final farewell by blowing Melbourne Storm away in the first half to end a five-year wait for an NRL title with a resounding 21-6 victory at ANZ Stadium.

Slater was available to end his magnificent career in the Sydney showpiece after being cleared of a shoulder charge on Sosaia Feki in the Preliminary Final win over Cronulla Sharks.

The legendary Storm full-back was unable to sign off in style though, failing to make an impact as the Roosters dominated the decider and were rewarded by being crowned premiers for a 14th time.

Latrell Mitchell scored a try - which he converted - and two penalties, while Daniel Tupou and Joseph Manu also touched down to give the rampant Roosters an 18-0 lead at the break.

Josh Addo-Carr gave the Storm hope with his 18th try of the season midway through the second half and Cameron Smith, making a record 36th finals appearance, became the first hooker in premiership history to score 200 points in a season but Melbourne were unable to claim back-to-back titles.

The outstanding Luke Keary added a drop-goal to give the Roosters a bit more breathing space and Mitchell added another penalty late on as the Storm were soundly beaten, having been a long way from their best, while Cameron Munster was sin-binned in both halves.

Gutsy former Storm full-back Cooper Cronk played through the pain barrier before coming off in pain two minutes from the end, eight days after suffering a "severe" shoulder injury and was rewarded with a second successive winners' medal.

Slater was booed when he took a first high ball and Roosters fans raised the decibels even higher when Mitchell slotted over an early penalty.

Cronk barely touched the ball in the opening stages, but the Roosters were dominant and Tupou took a brilliant pass from the lively Keary to race over in the left corner just seven minutes in.

Trent Robinson's men were relentless and the holders were unable to contain them, Keary orchestrating again as Mitchell stepped inside Will Chambers and dived over following a mistake from Slater, who was unable to stop the powerful centre with a desperate last-ditch tackle.

Mitchell added the extras and was on target from another penalty after Munster was sin-binned for a professional foul on Jake Friend, Nelson Asofa-Solomona's knock-on proving to be costly.

Things went from bad to worse for the rattled Storm, Friend whipping a pass to James Tedesco, whose quick hands gave Manu the chance to leap over in the right corner to give the Roosters a commanding lead at the interval.

Blake Ferguson was denied a fourth try just after the break when his foot landed on the line after being picked out on the right wing and Munster had a score ruled out for obstruction at the other end.

The rapid Addo-Carr finally got Craig Bellamy's side on the board by taking a stray pass from the otherwise outstanding Keary to dart 85 metres for an intercept try just after the hour-mark, Smith converting to make history.

Keary made amends by landing a drop-goal with 12 minutes to play and Mitchell took his tally on the night to 12 from the tee after Munster was sin-binned again as his frustration got the better of him.

Cronk walked off nursing his shoulder following a heroic display of courage as he became the first player to win back-to-back titles with different teams.