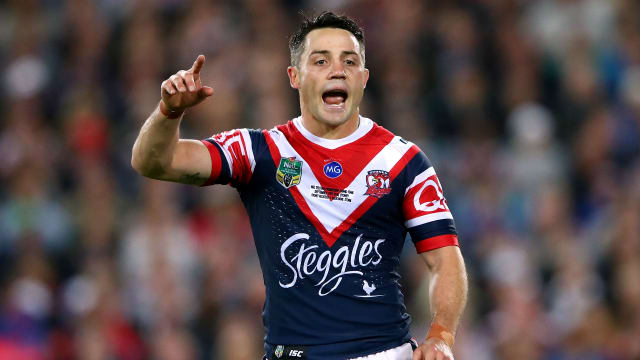 Inspirational Queensland star Cronk incredibly featured for all but the final two minutes as Trent Robinson's side set up the 21-6 win with a dominant first-half display.

The victory came despite their half-back being forced to the fringes for much of contest, as he was nursed through at just "30 per cent" fitness according to Cordner.

Cronk had been a major doubt leading into the match after seriously injuring his shoulder in the Preliminary Final against the South Sydney Rabbitohs eight days earlier.

"We knew Coops was touch and go and he pulled through," Cordner told the Nine Network.

"We had to make up a game plan where we protected him as much as possible and we executed that. To put in a performance like that on the biggest stage is unbelievable.

"We wanted [Cooper] on the field. He actually broke his scapula. That's a big performance by him and will go down in history for sure."

Luke Keary picked up the slack amid Cooper's reduced role to guide the Roosters to their second premiership in six years, with the former’s performance against the Storm securing him the Clive Churchill Medal.

The result ruined Billy Slater's hopes of a fairytale farewell, but the retiring Melbourne full-back could not help admiring former team-mate Cronk's courage.

"He's a really good mate of mine," Slater said. "They hid [his fitness] really well from us.

"I told him how proud I am. I'm shattered by our performance but I'm proud of him."