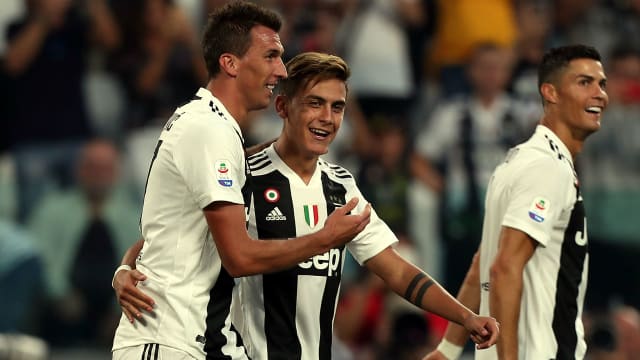 A seventh straight win for Massimiliano Allegri's side means they are now six points clear of second-place Napoli – a lead that could be reduced to five on Sunday should Sassuolo continue their fine start to the season by beating AC Milan.

Napoli took an early lead through Dries Mertens, before Cristiano Ronaldo and Mandzukic combined to equalise. The World Cup finalist scored again early in the second half after Ronaldo's shot had cannoned back off the post.

Mario Rui was dismissed in the 58th minute for the visitors before Leonardo Bonucci scored his first goal for the club since returning from Milan in August to seal the win 14 minutes from time.

After Pitor Zielinski hit the upright, Napoli broke the deadlock in the 10th minute by punishing Bonucci's sloppy pass with an incisive move that resulted in Mertens sliding Jose Callejon's cross into an unguarded net.

Juve drew level in the 26th minute when Ronaldo turned Elseid Hysaj inside out before whipping a fine cross into Mandzukic, who headed past David Ospina.

Ospina did brilliantly to push Ronaldo's 20-yard strike onto the post four minutes after the restart, but Mandzukic was on hand to slot the rebound home.

Napoli's hopes of finding a way back into the game were dealt a huge blow shortly before the hour mark when Mario Rui received a second yellow card for an ugly tackle on Paulo Dybala.

Bonucci prodded home Ronaldo's header off a corner at the back post to ensure Juve claimed yet another maximum haul, but the Portugal star spurned a great opportunity to make the scoreline more emphatic.