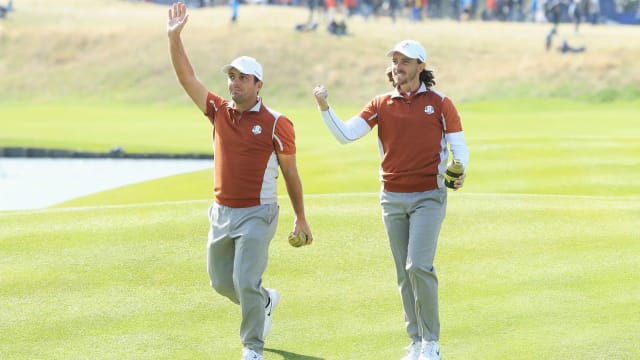 Francesco Molinari and Tommy Fleetwood became the first European pairing to win four matches together at a single Ryder Cup as they beat Tiger Woods and Bryson DeChambeau to ensure Thomas Bjorn's team will lead heading into Sunday's singles.

Open champion Molinari and Fleetwood, the most assured rookie imaginable, have formed a superb alliance at Le Golf National, three of their four successes coming against United States pairs that included Woods.

Americans Lanny Wadkins and Larry Nelson are the only other duo to have combined for a 4-0 record, back in 1979.

On Saturday, Woods and DeChambeau were beaten 5 and 4 by Europe's star pair, leaving the hosts 9-4 up with three foursomes matches still out on the course.

The first 4-0 duo for #TeamEurope

Seconds after that win, Henrik Stenson and Justin Rose completed a nerve-jangling 2 and 1 victory over Dustin Johnson and Brooks Koepka - the Swede holding his nerve to drain crucial putts on the 16th and 17th.

However, the USA looked certain to win the remaining two foursomes matches and reduce their deficit to 10-6 heading into Sunday's singles.