Benitez in the dark over Newcastle takeover talk 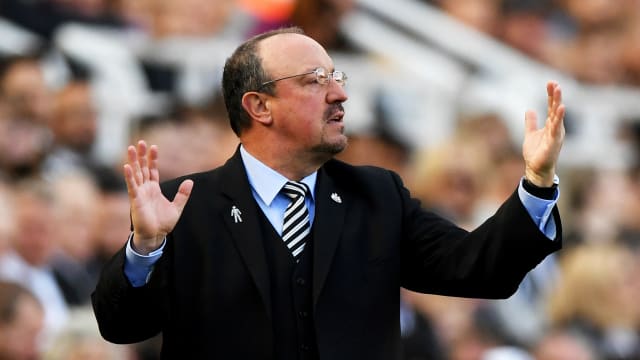 Rafael Benitez says he has not been informed about a possible takeover of Newcastle United.

Reports have suggested former Manchester United and Chelsea chief executive Peter Kenyon is attempting to form a consortium to buy the club.

Owner Mike Ashley has proven a controversial figure during his time at the helm, with his relationship with Benitez regularly reported to have become fractured.

But the Newcastle manager, whose contract at the club is set to expire at the end of the season, has not been told of any takeover developments.

"I have not spoken to Mike Ashley today, but if he is around it is positive," Benitez said following his side's 2-0 loss to Leicester City.

"We have to concentrate with things on the pitch.

"I don't know anything about a takeover, I just concentrate on the pitch."

A first-half penalty from Jamie Vardy and a second-half header from Harry Maguire secure all three points for Claude Puel's side at St. James' Park#PL#NEWLEIpic.twitter.com/uAQ7FwGfpb

Newcastle remain in the bottom three of the Premier League after Saturday's home defeat to Leicester, prompting Benitez to criticise his team's defending.

"Obviously, I am disappointed. We conceded two goals from set-pieces and didn't take our chances," Benitez said.

"The second goal killed us mentally. Leicester were well organised and worked hard and they have some good players.

"When you concede it is always difficult for you. When things are not going in your favour you concede penalties like that.

"We have to manage the squad, we tried to be more offensive, but we didn't take our chances and we were exposed in the second half. The team is working hard, you cannot complain about that."

Goals from Jamie Vardy and Harry Maguire saw the Foxes through to victory, but it was James Maddison – touted for an England call-up – who caught Claude Puel's eye.

"Of course I am satisfied, it was a strong performance against a good team. We continue to play on the floor with quality," the Leicester boss said.

"We had fantastic discipline. It was a tough game, people will say Newcastle are in difficulty, but they have quality.

"James Maddison continues to give his best and improve. He has to continue that work and we will see in the future. He cannot have a mind on the future of his national team. We will see."