Alli out of Barcelona clash but Pochettino to assess Vertonghen, Dembele injuries 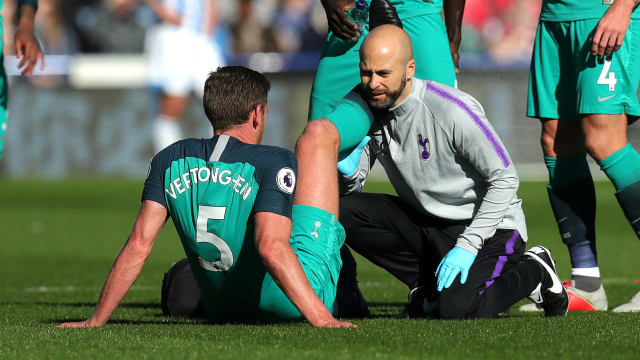 Dele Alli will miss Tottenham's Champions League clash with Barcelona but Mauricio Pochettino will wait for assessments on Jan Vertonghen and Mousa Dembele.

The Belgium duo were replaced by Harry Winks and Victor Wanyama at half-time in Spurs' 2-0 win at Huddersfield Town in the Premier League on Saturday.

Alli, Hugo Lloris and Christian Eriksen missed the trip to Yorkshire due to injury and Vertonghen and Dembele could also be doubts to face Barca at Wembley.

Pochettino confirmed Alli has a hamstring injury and will not be available for Wednesday's match against the Spanish champions, but he has faith in his alternative options.

"We need a squad, 24 players able to play," Pochettino told a news conference.

"I get upset sometimes at questions about players who are ready because we need all these players.

"What if we didn't have Harry Winks or Wanyama ready to come in today to play?"

Some superb saves and a clean sheet for @GazzanigaPaulo! #COYSpic.twitter.com/S6mTbZVEhW

Huddersfield caused Tottenham problems with a physical style of play, although Harry Kane in particular appeared to relish a battle with Mathias Jorgensen as he scored both goals.

And Pochettino was thrilled his side claimed three points to round off a week that has seen them win at Brighton and Hove Albion in the league and knock Watford out of the EFL Cup.

"I think the approach from the team was fantastic," Pochettino added. "We knew very well the game that they were going to play. Huddersfield were so aggressive from the beginning. I think the whole game was aggressive.

"I think we found an unbelievable atmosphere. The Huddersfield fans were fantastic. Of course our fans too. But I think today the atmosphere was the most amazing atmosphere in England. It was a tough game.

"I was so pleased because I think the team was ready to fight, otherwise here it's a tough place to win. I think Huddersfield played well.

"They put in a very good performance, but I think our team deserved it because we maybe played a different game, or approach to the game.

"But the team was available to fight and that pleased me the most because in these types of games first of all you need to be at the same level of aggression as the opponent."