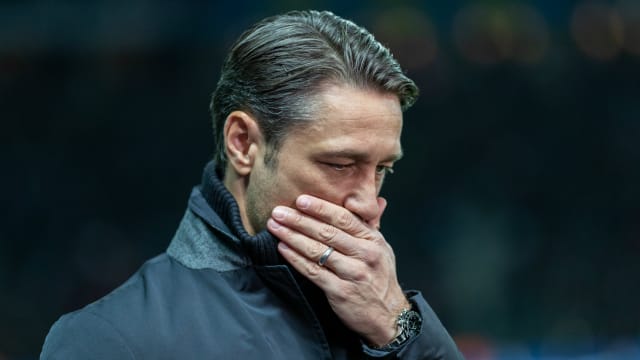 Niko Kovac insists there is no reason to panic after Hertha Berlin inflicted the first defeat of his Bayern Munich tenure on Friday.

Vedad Ibisevic's penalty and a close-range finish from the influential Ondrej Duda condemned the champions to a 2-0 loss following a second underwhelming performance in succession.

They had been held to a surprise 1-1 draw at home against Augsburg in midweek and Bayern are now at risk of surrendering top spot in the Bundesliga.

Kovac was frustrated with his side's generosity in both penalty areas - Jerome Boateng having conceded an unecessary foul to set up Ibisevic's over - but saw little reason for alarm.

"Not only did we not take our chances but we conceded two avoidable goals. That must not happen," the Bayern boss told reporters.

"For the second goal we made a tactical mistake. Mistakes happen, but if you make them in the Bundesliga you will be punished.

"I thought we played a decent game overall, but the result makes it difficult to justify that. We combined well and controlled the game but we just didn't take our chances.

"[Losing] is not a problem at all. Those who know Bayern know we will not put up with it easily."

Sorry to the team and fans. Next time we will be back stronger with a win @FCBayernpic.twitter.com/cBN0wqs6R9

The result ended a run of 14 league meetings without a win for Hertha against Bayern.

Head coach Pal Dardai felt the victory was richly deserved, as they moved level with their opponents on 13 points at the summit.

"We are very pleased with our victory and the performance," he said. "In the first half played well and passed the ball around and scored at the right times.

"In the second half we really fought for the victory and we gave everything. We earned the three points today. It's a great day for us."